One of many solo projects spearheaded by Ryan Wilson who is perhaps best known as the founder of goregrind/brutal death metal project Intestinal Disgorge, Pneuma Hagion is his brutal blurring of war-like atmospheric death metal highly influenced by the formative releases from Incantation. Each of his active projects are remarkably different conceptions but retain a somewhat home-brewed, DIY quality and though I was familiar with The Howling Void (‘The Darkness at the Edge of Dawn’ was included on my 20 overlooked doom records of 2017 list) previously, Pneuma Hagion skated under my radar for several years. I’d missed out on a series of ‘Trinity’ demos in 2015 and a handful of EP releases since, somewhat surprising because I am a moderate fan of both Gnostic subversion and obscure cavern-core alike.

The holy spirit aggresses quickly, succinctly and with only the deepest register employed. Short and elastic bursts of death metal appear as quick and defiant curses across each of the three ‘Trinity’ demos. No great variation or distinction persists within the trilogy and each contains roughly 6-7 minutes spread across three tracks. These simply composed pieces are akin to war metal’s history as much as they are to the caverns of early 90’s New York death metal. Upon first listen it’ll likely be a growling blur until the 2017 EP ‘Rituals of Extinction’ provides the final statement in the form of 30% longer death/doom tirades. This is largely where Pneuma Hagion begins to shine in terms of twisted and furious guitar riffs. I hear the development of the project’s sound hitting upon a mix of war metallic intensity and, when structured, resorting to sharp gutter crawling McEntee-isms.

Against my better judgement I took more interest in Wilson‘s ideas and explanations of themes I’d read in interviews rather than the musical content of the trio of ‘Trinity’ demos. There are some small irritations here and there. Guttural vocals sound slightly processed throughout, though I understand they’re intentionally as deep as his register can muster. Where I check out for a few minutes is during ‘Trinity II’, I think it lacks the same relevance and energetic hammer that the other two parts offer. On the other hand ‘Trinity III’ is particularly mesmerizing. Unless you are dedicated to cavern-core and seek heavier war metal variations ‘Rituals of Extinction’ is likely the key release here, at least for my death metal centric taste. I’m left genuinely curious as to how Pneuma Hagion‘s sound will evolve on the back-burner considering how thin he spread himself between 5-6 major projects last year, I’d personally like more of this one.

As a collector of things I’m drawn to the simple look of the vinyl sleeve and the William Blake watercolor painting on the front offers some small incentive to pick it up. I would generally recommend this compilation for it’s conceptual focus on deeper tonal range and genrally menacing atmospherics. ‘Trinity’ may not be groundbreaking but it is enthralling. The caveat is I’m not sure how often I’d personally listen to it as I see little re-spin potential outside of the 2017 EP tracks. Definitely give those tracks a thorough listen if nothing else. 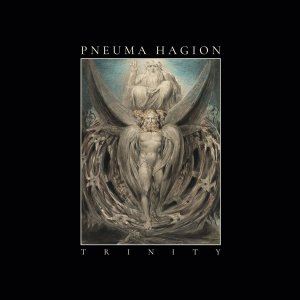