The apparition of Portland, Oregon death metal band Ritual Necromancy revealed itself at a slightly inopportune point of exhaustion with Incantation influenced atmospheric death metal releases. Their unique use of HM-2 chainsaw distortion paired with reverb-soaked production was admirably intense but their debut didn’t leave a strong impression. While I never tire of those influences, or murky sound, my main issue with their 2011 debut ‘Oath of the Abyss’ was strictly the soggy-ass drum performance. Brooding, heavy riffs and strange lead guitar shrieks made for an interesting listen that couldn’t pull away from the miasma of what I consider ‘demo’ quality experimentation. Thanks to decades of being pleasantly surprised by driven and steadily improving death metal projects, I’m never married to a first impression. In taking their time and expanding their greater vision beyond cavern-core Ritual Necromancy make a great showing on ‘Disinterred Horror’.

When the ‘Void Manifest’ EP released in 2014 there was a notable change in sound, some smaller approach to riffing, all while still retaining the thudding, cavernous sound of the band. This change was most likely substantial as a result of staff changes, with the recording taking place without the input of a second guitarist. The post-EP addition of Wroth from Rites of Thy Degringolade on second guitar has perhaps made all the difference in unearthing greater cohesion and sonic fidelity in the band. The sound is distinctly atmospheric and brutally delivered but cleanly expressed a la Cruciamentum or the latest Temple Nightside and I’d be surprised if it wasn’t Dan Lowndes mixing/mastering.  The loss of the Swedish guitar tone is actually not an issue at all and in fact a welcome deletion from their overall sound along with the horse-clopping shit drumming of ‘Oath of the Abyss’.

Truly atmospheric death metal is rarely as aggressive as ‘Disinterred Horror’ and in financing a higher fidelity recording the project’s inherent talent for creating tensile atmospherics shines through more appropriately than previous. While you might still hear the revitalized bones of ‘Mortal Throne of Nazarene’ in their mid-to-fast paced moments Ritual Necromancy express greater dread in the otherworldly conjuration of their own making within slower death/doom moments. The lurching growl of “Cymbellum Eosphorus” is the best example of that core McEntee influence refined to a powder and tossed aflame into their own performative atmospheric smoke. Granted you’re still getting the pinch harmonics, trilled riff builds, and unfurling sluggish expansion that comes with early Incantation resemblance but ‘Disinterred Horror’ merely uses those dynamics as tools of influence and not a parody or strict copy. The experience doesn’t necessarily transcend influence as much as Krypts or Dead Congregation but still manages to exist on the same playing field.

With five compositions and forty minutes the extended song lengths give just enough room for the atmospherics to intertwine with, and transition between, aggressive death metal riffing and this makes the listening experience superior to a lot of similar releases. Fewer statements made with more elaborate and dynamic arrangement carries my attention better and from start to finish. This is a rare case of an album where I wouldn’t’ have arranged the tracklist any other way. As someone who repeatedly listens to records old and new and constantly unearths oldies, knowing I can come back to ‘Disinterred Horror’ and not skip any song creates greater value of possession. That’d be my sort of awkward collector’s endorsement for the overall experience of the album, where I might not find it ultra original or massively moving but I think it will hold up to re-visitation across years of possession. The preview of “Command the Sigil” gives a great glimpse of the record’s faster moments but I’d suggest previewing at least one track from Side B to get a sense of the strong death/doom fluctuations inherent to the album’s overall quality. 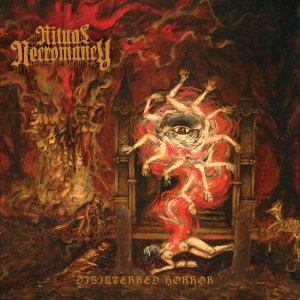