Rapacious in their early ambitions Linköping, Sweden based black/death metal band Nekrokraft were perhaps too eager on their first year of demos in 2012. ‘666 Ways to Torture’ saw a band not yet set in their ways, or at least still figuring the best way to approach their country’s higher art of melodic black/death metal. Their first EP ‘Witches Funeral (Reborn in Fire)’ followed quickly that same year, shifting away from the inspiration of early Necrophobic towards the thrashing middle era of Immortal while still maintaining some melodic black metal style. It wouldn’t be echoed in further releases but is worth hearing that early soul-searching on their ‘Witches Funeral’ compilation. In just four years the band made incredible strides in terms of honing in on the meloblack wave of the mid 90’s and incorporating modern black/thrash to keep it interesting. Their 2016 ‘Will O’ Wisp’ EP was at least on par with most still-standing legacy black/death acts from Sweden’s pantheon (particularly Necrophobic) and vocalist Angus Norder simultaneously provided vocals for the two most recent Witchery releases as well.

With some small hiatus allowed for the 2017 Witchery release, Nekrokraft return in 2018 with their first proper full-length and perhaps far greater vigor than previous. A few major changes give ‘Servants’ a heavy-handed feeling appropriate for Swedish black/death metal and most self-evident is the oppressive nature of the mix. Loud and kinetic to the point of abrasion, much like ‘Mark of the Necrogram’ was earlier this year, there is nary a single moment of subtlety allowed on the Audiosiege mastered ‘Servants’. Although quietly present on ‘Will O’ Wisp’ the keyboard work here goes a few steps beyond Necrophobic‘s ‘Hrimthursum’ in terms of dancing dangerously close to sounding like the rush of Dimmu Borgir influenced trolls post-‘Enthrone Darkness Triumphant’. I definitely hear hints of fellow Swedes Triumphator, Setherial, and even some thrashier hints of ‘Banished to the Underworld’ era Satanic Slaughter in the guitar work but no comparisons would stray far from Sweden.

What I suppose I’m not hearing is anything I hadn’t heard before in the 90’s and as a lover of these sub-genres I have no real problem with that. The keyboard work has an odd early Dark Funeral vibe to it and though there aren’t a ton of truly effective melodic black metal riffs, they’ve captured the style in an appropriate way. ‘Servants’ doesn’t necessarily outdo the curiously listenable ‘Mark of the Necrogram’ from the old masters this year but it does at least sit comfortable in the ‘openers’ slot next to comparable projects like Wormlight, Thulcandra, and Istapp. It might be the sort of ‘genre entry’ that Scandinavian metal fans are used to, but I really appreciate how driven the music sounds and the fast-moving ambition of the project is truly impressive. They might need one more release to tweak things towards their own sound but as is, ‘Servants’ is a solid melo-black/death record. Highly recommend the riffs from “Servants ov the Black”, “Brimstone and Flames” as well as “Lechery”. 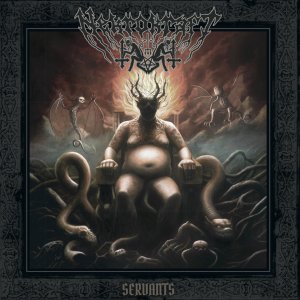