After some stints in folk and black metal bands in the late 90’s guitarist/vocalist IX formed Urfaust as a solo ambient project and quickly set to work on an ambient record that only showed curious hints of what was to come. The ‘Urväterlicher Sagen’ demo was quite standard ambient fare for the time but IX‘s vocals stood out immediately as some sort of crowing wizard howling enchantments to seal off a great forest from intruders. Much of this ambiance and almost ‘epic’ tone would continue on in the project’s debut full-length ‘Geist ist Teufel’ as drummer VRDRBR aka Nachtraaf aka Jim Doktor helped round out the songwriting and integration of instrumentation beyond keyboards/synth. The early years of Urfaust are perhaps among the most mind-bending releases in atmospheric black metal to date with shrieking far more outrageous than Bethelhem and atmospherics on par with mid 90’s Apruptum and Isengard‘s ‘Høstmørke’. But no comparison could effectively prepare any listener for the folk metal inspired instrumentation and frankly quite insane operatic ranting vocal style. Fourteen years later Urfaust are still completely in their own league despite having moved on from the hysterics of their earliest material.

What initially drew me into the depths of Urfaust‘s discography was actually the 2012 compilation ‘Ritual Music for the True Clochard’ and specifically the remastered tracks from their second album ‘Verräterischer, Nichtswürdiger Geist’. It is worth noting that the band is from the Netherlands and the choice to use misspelled or poorly translated German for songtitles has always been an odd choice that wouldn’t phase out until 2010. I feel like if you know nothing about Urfaust‘s first era ‘Verräterischer, Nichtswürdiger Geist’ might be a scratched-out, challenging listen but in terms of atmospheric black metal that is unique and perhaps entirely non-derivative it is an essential release. If the sound is a mess the compilation I mentioned will do just as well to prime you as to why the underground was abuzz with Urfaust for several years before they gained larger cult status. The remastered version of ‘Verflucht Das Blenden Der Erscheinung’ always blows my mind, and must be heard.

The apex of this original trilogy of full-lengths was, for most, ‘Der freiwillige Bettler’ and saw the band finding a secure home on Ván Records. It is the most refined release in their early style that still features those operatic vocal performances, which I like to think of as ‘Hammerheart’ era Quorthon singing for Candlemass with intermittent howling seizures. Greater layers of guitar work helped create depth in Urfaust‘s sound but some of the echoing, lo-fi mystique was lost in favor of something thick and murky. In the long wait for another full-length it seemed as if the band were finding a new sound for themselves and when ‘Apparitions’ cropped up in 2015 as a spontaneously recorded EP. It was an almost funereal sounding record with a mix of darker ambient works not unlike early Urfaust but clearly a decade detached. This appears to have served as inspiration going forward in an attempt to fuse the ambiance that IX excels at with atmospheric black metal and some greater influence of epic doom metal.

‘Empty Space Meditation’ is perhaps the prettiest record I own on vinyl, inside and out, as Urfaust‘s relationship with Thorny Thoughts Artwork produced one of my personal favorite examples of black metal album art. The music itself was quite underrated at the time for whatever reason as the extended introduction and floaty synth/keyboard work demanded mindfulness. I think few things are as comical in the world of metal writing as a young man plainly reviewing an album with “meditation” in the title and feeling jilted that is spaced-out and laid back. The wondrous think about ‘Empty Space Meditation’ was it’s retention of the band’s signature personality whilst escaping some of the more exuberant insanity of the vocal performances. IX’s performances were no less grand, but perhaps fittingly set upon the ‘epic’ doom metal/atmospheric black metal mood of the record. ‘The Constellatory Practice’ proverbially plucks Urfaust‘s sound out from the stars and lands back on earth in some state of enlightenment.

If the sleepy, space-faring atmospheric black metal of ‘Empty Space Meditation’ left you anxious then I doubt the amplified, luxurious production and doom metal beats of ‘The Constellatory Practice’ will disappoint. I don’t think IX‘s vocals have ever sounded so confident or generally active on an Urfaust release as on the opener “Doctrine of Spirit Obsession”. What should be obvious upon first listen is that in a quest for a mixture of atmospheric black metal, epic doom metal and ambient music Urfaust have created some of thier best work by edging almost entirely away from the recognizable structures of black metal. “False Sensorial Impressions” provides just that, sensorial trickery that lures the ear in with the impression of screeching lo-fi black metal, like a distantly crackling Ildjarn record in a giant echoing hallway. In some ways this sort of approach again harks back to the experimental affect of Arckanum and Abruptum‘s sorely underappreciated “In Umbra Malitiae Ambulabo, in Aeternum in Triumpho Tenebrarum” briefly.

“Trail of the Conscience of the Dead” is the centerpiece of the album for me, or at least the main standout that offers a clear epic doom metal composition. It is somberly delivered with a grand and roaring guitar tone and IX‘s triumphant voicing driving home one of Urfaust strongest tracks. Layers of trailing strings and ringing guitar leads almost begin to evoke the similarly produced recent works of The Ruins of Beverast but fully escape the funeral doom pacing. In light of this great hot spot of quality and ultimate expression of epic doom the space ambiance and nods to the earlier work of the band create what I think is a certain new high point in the band’s career in development and measured growth since roughly 2011.

I found that I had to listen to ‘The Constellatory Practice’ quite loudly to hear every detail across repeated listens. The space and tribal ambient works might have trailed on for about 4-5 minutes too long but in the moment none of it felt like a pointless lull between bigger statements. Of course I could have used one more big, un-obscured epic or actual atmospheric black metal track instead of “False Sensorial Impressions” but I don’t think it mars the quality of the experience. It will take some patience and likely a quiet, funeral doom-like mood to soak up ‘The Constellatory Practice’ often, but I would count this as one of the better releases in the first half of the year. 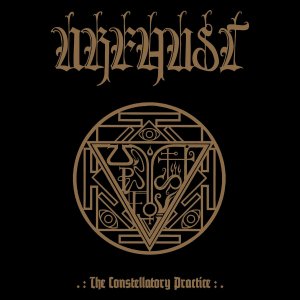