Plagued by a revolving door for guitarists for their first decade of activity Italian death metal band Valgrind formed in 1994 and managed four demos and one EP before going on hiatus around 2003. A five year break ended up being pivotal for the project as vocalist/bassist/keyboardist and founding member Massimiliano Elia switched over to guitars and recruited guitarist Daniele Lupidi from Hateful (and later Blood of Seklusion). By 2008 Lupidi had switched to vocals (and eventually bass) securing a functional duo that have served at the epicenter of Valgrind‘s frantic old school death thrashing metal sound for the last decade. Since I have no certain access to their demos and EP, which would be a worthwhile compilation, I’ll have to start with their full-lengths for reference.

And what a place to start with the incredibly brutal ‘Here in After’-era Immolation style death metal of ‘Morning Will Come No More’ from 2012. You can hear influence from Rob Vigna to Trey Azagthoth all over the album, especially “When Mortal Skin Ends to Be” and the opener. Though their debut full-length after 18 years wasn’t incredible for 2012 it was entirely in good taste and the same was true for Valgrind‘s second album. ‘Speech of the Flame’ featured Hateful‘s second guitarist Massimo Vezanni and his thrashier riff style meant for strong chemistry with Elia who seems heavily influenced by classic US death metal. Drummer Gianmarco Agosti, who is also now playing with Italian hardcore legends Raw Power, offers some incredibly brutal work on both ‘Speech of the Flame’ and the band’s 2017 EP ‘Seal of Phobos’ which are perhaps the band’s most savage to date, recalling Mithras to some degree.

‘Blackest Horizon’ is perhaps no less brutally delivered but they’ve dialed back the riffing that reminded me of Immolation in favor of some thoughtful thrash influenced death metal riffing that has hints of Nocturnus, Hellwitch and a few songs that sound like they could have come from an early Crypt of Kerberos demo. The use of keyboards and aggressive death/thrash riffs gives me flashbacks to Crystal Age‘s ‘Far Beyond Divine Horizons’ an album that elevated the approach of ‘The Key’ towards something appropriately modern for the mid 90’s and in this case the 2010’s. Mordeth did some similar semi-progressive exploration on ‘Cybergods’ in 1995 but nowhere near as intense as what Valgrind is doing now.

Some semblance of ye olde sci-fi death/thrash aside Valgrind have more or less nailed down a sound that is entirely their own on ‘Blackest Horizon’. Though I was initially expecting their usual mix of ‘Dawn of Possession’ and ‘Gateways to Annihilation’ that’d sort of festered over the first two albums I actually prefer this newly dynamic and unique sound. “The Blackest Horizon” is a great example of keyboards being used in a death metal song appropriately both in creating atmosphere and complimenting the huge riff that kicks things off towards more detailed guitar work. “Third and Last” before it had a very ‘Syzigial Miscreancy’ vibe to it that made it one of my favorite tracks. The only small blip on my radar that I wasn’t sure about was the use of a directly Rotting Christ influence solo/riff at the end of “The Empire Burns”. It wasn’t that it was poorly implemented but just came out of nowhere until I’d listened more closely to the track’s first few riffs. Valgrind had done conceptually related/multiple pieced tracks on previous albums but none as strong as the trio of “Last Angel” tracks that serve as the closer for ‘Blackest Horizon’ and the multi-tracked vocals and guitar work on “Last Angel (Hades Horseman)” ended up being one of my favorite parts of the record.

But really, with the exception of the weird Rotting Christ solo that didn’t fit in, this is a great death metal album start to finish. Exceptional guitar work throughout, smart keyboard implementation, and a highly skilled drum performance sees the band successfully expanding their already heavy sound into something more modern, thoughtful and unique. So far, ‘Blackest Horizon’ compares favorably beyond what most all cannibalistic old school death metal influenced groups are doing in 2018. Although May is definitely packed with worthwhile extreme metal releases Valgrind‘s third album is going to be difficult to top. 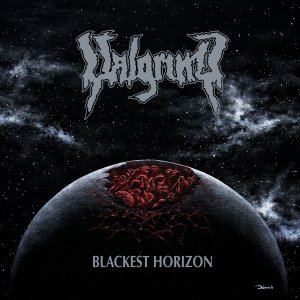