Professor Black aka The Hammer aka Chris Black aka Christopher Maycock is an incredibly prolific traditional heavy metal artist, producer, publisher, and itinerant writer active since the mid-90’s. Always armed with a DIY approach to his music Black has proven himself a driven polymath with a Midas touch for nearly every project he conceives whether it is as a writer for Metal Maniacs  or composing, performing and producing countless records on his own. Best known for his 20 year span with the now defunct Dawnbringer as well as the 00’s finest US power metal band Pharaoh Black hasn’t been afraid to explore a range of projects from Nachtmystium to his work with members of Finnish psych-rockers Circle in Aktor. Most relevant to this Professor Black EP ‘You Bastard!’ is probably the hard rocking swing you’d occasionally hear in High Spirits but with less of Scandinavian heavy metal feeling of ‘Motivator’ and more of the NWOBHM punchiness of ‘You Are Here’.

My introduction to Black‘s work was in 2012 with Dawnbringer‘s exceptional epic heavy metal album ‘Into the Lair of the Sun God’. Everything considered, even Pharaoh‘s inarguable classic ‘The Longest Night’, that particular Dawnbringer release is my favorite thing he’s done. Not because it was the first thing I’d heard but because it hits upon a style of heavy metal that is rarely done so well. ‘You Bastard!’ isn’t an epic heavy metal record but rather a set of anthemic NWOBHM circa ’85 melodic hard rockers. If you’ve heard Oz‘s ‘Decibel Storm’ and can imagine something more melodically dynamic you’ll get a sense of the tone of Professor Black on this release. The tone of Black‘s voice has never been huge, in fact some of the appeal of his vocals in the past has been the somewhat subdued timbre of it, but here he sounds more robust and confident (Brian Ross-ish on “Last Call”) to suit the 80’s hard rock/heavy metal feeling of the compositions. ‘You Bastard!’ doesn’t necessarily reflect purist underground 80’s heavy metal but a highly melodic take on it that is all Black’s own with small hints of classic Riot and Züül being fair, but not direct, comparison.

‘You Bastard!’ is an addictive metal substance that pulls it’s straight forward approach from driving hard rock and and 80’s appropriated classic heavy metal lead guitar work.  Black‘s power is hardest hitting with his mid-paced drumming that could function just as well on an early Scorpions or Tank album, but you’ll come off this album dazzled by the melodic vocal work and true-ass guitar performances. I think the first time I put it on I left it on repeat for three hours and did so for about three sessions this week, setting aside most of the other stuff I was aiming to work on. However much though he’s put into the track arrangement, the playlist is immaculate in it’s flow of ideas. Each track has some texture, riff, vocal or harmony between it’s whole that ends up making for a surprisingly memorable 22 minutes of music.

Would highly recommend leaving the whole thing on repeat for 2-3 spins but if you had to sample a few tracks I’d jump in on “Act Alone” or “Stuck in the USA” and don’t skip “Closer to the Blade” while you’re at it. Black had posted in late March that he was fully finished with three releases, so if they’re of the caliber of ‘You Bastard!’ I’m pretty psyched to hear more in 2018. Definitely a must-listen for the New Wave of Traditional Heavy metal crowd that should be exciting for fans of High Spirits ‘You Are Here’. 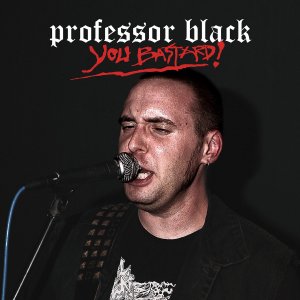