In the ever-growing realm of traditional heavy metal purists and ‘throwback’ projects Gatekeeper represents a better-evolved, tasteful force of apex predatory heavy metal inspired by the well documented history of the epic end of the spectrum. With the now internet-stashed breadth of 80’s metal re-issued, remastered and kept alive with more respect than most any other underground music movement, amazing bands are continually and responsibly inspired from this documentation. The result is hopefully always as good as ‘East of Sun’ the debut full-length from this Canadian group formed nearly a decade ago in Alberta as Jeff Black‘s attempt to escape the chuggin’-and-thuggin’ tech-death doldrums of his environment.

The epic heavy metal intent of Gatekeeper’s first EP ‘Prophecy & judgement’ was clear in it’s inspiration that aimed for Bathory‘s most extended viking metal journeys but communicated that valor through classic heavy metal delivery. The effect was similar to Cromlech‘s debut ‘Ave Mortis’ but without the baritone cheese, instead opting for original vocalist Shorre McColman‘s subdued, thoughtful voice. He’d really fit right in if there was an opening for Solstice or Atlantean Kodex, two of the more common comparisons for Gatekeeper‘s earlier material. Around this time the band relocated to Vancouver, B.C. and did two split releases; One with Eternal Champion including their ‘Vigilance’ single and another with Funeral Circle soon after.

This is where I come in. I discovered Funeral Circle through a split with Lord Vicar and the first full-lengths from each band represent two of my personal favorites in ‘modern’ doom metal. Any band that could outshine my eager anticipation for a new Funeral Circle song was worth following close and Gatekeeper really impressed with ‘Bell of Tarantia’. It was a different sound for the band, something a bit more axe-swinging and less canoe-paddling/mead-swilling. As far as I can tell around 2016 Black restaffed the band entirely as his song-writing had either become more ambitious or, more likely, he needed a full-time Vancouver crew for their full-length. Of the additions I think the greatest affect upon Gatekeeper‘s vision was vocalist Jean-Pierre Abboud who’d joined Funeral Circle after their full-length. As I’d never heard his previous band Borrowed Time, I would never have predicted how explosive his delivery and range would be on ‘East of Sun’ based on Funeral Circle‘s “Hades Triumphant” alone.

‘East of Sun’ fires up with the rousing Manowar-like guitar thrust of “Blade of Cimmeria” and there’s no better way to open an album like this than with your “Kill With Power” moment. Ripping solos, speed metal riffing, and the absolute wailing of Abboud all electrocuted my expectations to death as I was expecting something more along the lines of epic heavy/doom metal a la Atlantean Kodex but ‘East of Sun’ reveals itself as a fully rounded and holistic heavy metal record where ‘epic’ is less a descriptor of speed and more of attitude and feeling. “North Wolves” will immediately massage your boiling blood bag of fury, ready to burst at the loss of Scald/Bathory-esque heraldry, because that inspiration is still entirely there as it was in ‘Prophecy & Judgement’. With greater capabilities and grander vision realized, Gatekeeper now switches gears towards classic North American 80’s metal and power metal in equal spurts.

This new focus sets the band unto greater pastures and ‘East of Sun’ begins to closer resemble the bands they’ve covered on bonus tracks here (Omen, Savatage) but the record as a whole also has the warmly epic feeling of Warlord‘s second comeback album ‘The Holy Empire’ as well as Cruz Del Sur labelmates Argus more recent work. I definitely hear some influence, intentional or not, of William Tsamis’ guitar work in several songs here (“Ninefold Muse”) and I think Warlord fans will appreciate the pace and lead guitars of ‘East of Sun’ quite a bit. Likewise if you jump straight to “Swan Road Saga” you should get a big whiff of Solstice from Abboud‘s quieter Simon Matravers-esque performances within that song’s epic structure that continues on into “Oncoming Ice”. It has me wondering what this band could do with a song like Scald‘s “Master of Tundra” considering how deftly Abboud is able to handle transitioning between epic doom crooning and 80’s power metal mania.

I’m not sure I’ve been as successfully kicked in the mouth by an epic heavy metal record like this since maybe the last Manilla Road, or Magister Templi before that and though I don’t find all of ‘East of Sun’ particularly memorable, the overall experience is something that drew me back in for several listens. Being in the pocket of Gatekeeper‘s metallic environs is always spectacular, though, and even if you’re just in it for the riffs I think the guitar work will be worth following for a few listens. The duo of “Blade of Cimmeria” and “North Wolves” is the most inspiring and representative pairing of the album but with the full listen considered, I think “Bell of Tarantia” and “Swan Road Saga” are equally effective as a set of tracks to preview the album’s scope and impressive composition. Gatekeeper have done epic heavy metal the right way here and kept things relatively orthodox but with no lack of inspired performances. 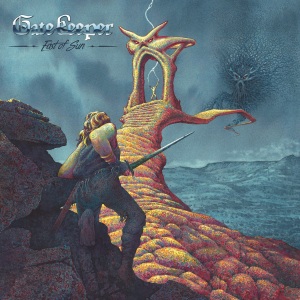