Obnoxious began as a progressive thrash metal band in Remscheid, Germany back in 1989. Their impossible to find 1992 demo ‘Prophet with Profit’ showed a band highly capable of finding common threads between power metal influenced thrash metal and the death metal scene that had exploded across Europe. ‘Twilight of Autumn Past’ is the resulting full-length that leans towards death/thrash but never loses sight of power metal/progressive thrash elements. It is a remarkable rarity in terms of old school progressive death metal as well as truly progressive takes on thrash metal. Obnoxious really never got any credit for their wildly inventive style, and for whatever reason German death metal is poorly documented/salvaged outside of private collections so this is really one for folks willing to dig deep for the sort of strange underground stuff represented here.

‘Twilight of the Autumn Past’ goes everywhere it can, and that includes places it perhaps shouldn’t at the tail end of the disc. The A-side completely shatters the sluggish B-side but Obnoxious doesn’t really drag ass until “Euthanasia”. For all of it’s experimentation the common thread is somewhat dramatic mid-paced death metal guitar work with plenty of melodic leads influenced by late 80’s power and gothic metal alongside North American and British death metal of the era. It reminds me of early Disciples of Power just in terms of complexity and generally being the same sort of blender-fucked death/thrash middle ground. If you’re familiar with the prog-thrash movement of Germany at the time with bands like Depressive Age and Psychotic Waltz much of ‘Twilight of Autumn Past’ seeks to match their ‘progressive and diverse’ approach but outdo them with true death metal integration and for my taste they did manage to match that ambition. The full-listen isn’t too far from what fellow like-minded Germans Incubator were doing on their first two albums, but has far more of a thrash influence throughout.

This band would splinter and regroup a few times before disbanding in 2009. Good luck finding anything they did beyond this CD unless you’re able to track down members/ex-members’ other project Goat of Mendes a punkish black/folk project that continues to this day. The only real connection I could draw between ‘Twilight of Autumn Past’ and Goat of Mendes’ debut is the shared guitarist being recognizable on ‘Hymns to One Ablaze’ more sleepy, melodic black metal sound… but it’s a stretch. This one should have equal appeal to collectors of progressive thrash oddities and prog-death metal mutants. At the very least you can say you know one band that combined power/thrash influences with death metal successfully and wasn’t pure garbage. I don’t think Germany’s history of weird and strange death metal takes itself seriously enough in terms of interest. Rare releases from groups like Obnoxious, Lemming Project, Immortalis, and Nameless all deserve preservation, remastering and re-issue that is as high quality as recent treatments of Incubator and Eternal Dirge have been. 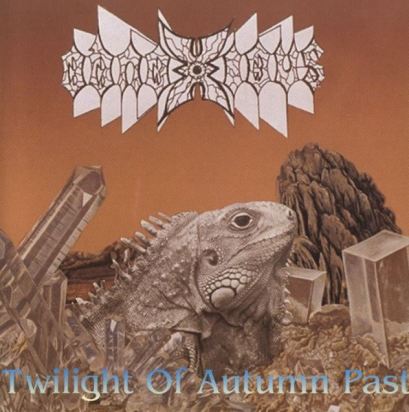 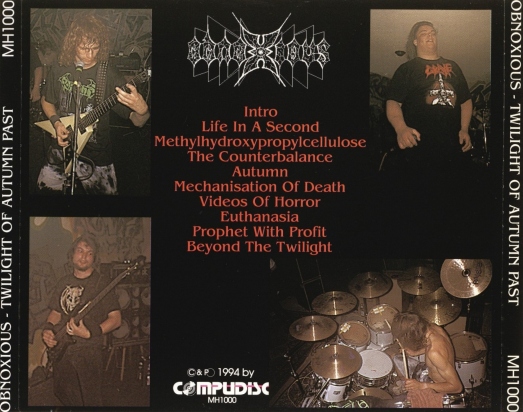