Brutal Argentinian death metal band Cadaver Putrefacto‘s debut full-length is exactly what it looks like: A brutal, gory hammer-fest a la mid-to-late 90’s Cannibal Corpse. If you were into that raw and riff-crammed ‘Tomb of the Mutilated’ and ‘The Bleeding’ era you’re an easy sell for this kind of thing. Slow down, though, because ‘La Maldicion del Zombi Errante’ isn’t a carbon Corpse copy; Their most brutal moments kick into similar gear as Supreme Pain‘s ‘Cadaver Pleasures’ but most of the time the band slows down and begin to resemble Haemorrhage (think ‘Emetic Cult’) as the record progresses. Cadaver Putrefacto’s intensity is the initial draw but their best riffs happen at a half-clip.

Trilled power chords and guttural Barnes-esque growled vocal patterns may yank your familiarity bone but never dance off into the realm of burps, pig squeals, or gravity blasts. ‘La Maldicion del Zombi Errante’ is remarkably tasteful (see: ‘old school’) considering the crushed zombie cartoon cover and blood-soaked logo. If you’re like me and fondly remember the era of ‘Hammer Smashed Face’ and Ace Ventura but never really stuck with the gory side of death and brutality, some of this album will be thrilling as a return to that era of abrupt and savagely dumb death metal. And it’s not all about Corpse here either, you’ll get hints of Deicide‘s self-titled album, a few riffs that remind me of ‘Loathing’-era Broken Hope and more obvious resemblance of fellow Argentinian group Eternal Grave, with a sound very close to their debut ‘Obras de una Mente Enferma’.

I figure most folks were sold, or ran screaming, at the mention of ‘Tomb of the Mutilated’ so I don’t need to prattle on too much. The album feels like old school death metal from that era and doesn’t try to reinvent the gory wheel that has been spinning since and avoids pure brutal death metal in favor of something more old school for the majority of the album. The guitar work is exciting and heavy for what it is and the straightforward nature of the composition and recording makes it all feel very tasteful. Best riffs here are in “Escatologia Obsession”, “Cadaver Putrefacto” and the opener “Sangriento Frenesi”. 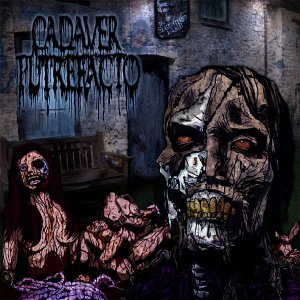