In stepping back into the early discography of this side project of Malokarpatan and Remmirath everyman HV it bears some context before jumping in. This is an exceptionally cult release from a group that is already intentionally rough around the edges at their best. ‘When the Moon Sang Our Songs’ was a demo recorded in one night back in 2013 that saw digital (Bandcamp) release in 2014 along with very limited editions of 24 physical copies. Anything HV and his compatriots touch has it’s own conceptual spin on black metal sounds, usually referential to a certain style or period of black metal. Krolok‘s ancient horror-fed second wave black metal is the complete opposite of his work in Remmirath, an underrated outsider progressive black metal project, and instead opts for atmospheric black metal seemingly informed by early Master’s Hammer, Cultes Des Ghoules, and Necromantia. I’ve only jumped on board with this demo because Krolok‘s debut full-length ‘Flying Above Ancient Ruins’ was a pretty solid album for what it was last year.

The unfortunate reality of diving into an obscure demo with preconceived ideas as to it’s fidelity and performances is that you might assume the project was fully formed in it’s infancy. In fact Krolok had the bones of their sound calcified with odd synth sounds and second wave black metal guitar riffs that seem to fade in and out of interest, again a bit like early Necromantia but with a clean bass performance. The sound has the sweeping reverb and echoing quality of a demo recorded with just 1-2 microphones which I suppose could be what they were aiming for. It sounds great in terms of period representation and seemingly spontaneous creation. The fidelity will be challenging if you’re expecting more than 90’s black metal demo quality. I found it’s sound entirely appropriate in understanding their stylistic intent.

A Carpathian Forest cover that acts as a centerpiece for the recording also seems to redirect it’s focus towards riffs and not the atmospheric aimlessness of the longer 7-8 minutes tracks that surround it. That burst of pre-1997 Norwegian black metal echoes in what I think is the best track on the demo with “A Violet Castle in the Sky” a seven minute weave in and out of black metal consciousness. I’d be well on board with this demo still if it weren’t for the dark ambient/atmospheric track “Cosmic Rituals” which serves as little more than filler as much as I like their choices for synth noises, it comes off sounding a bit more like late 90’s video game music that didn’t fit the rest of the demo.

I’d say this is meant more for collectors and folks who’ve already been impressed by Krolok‘s output so far. The digipak itself has a nice foldout with a black and white collage that looks pretty sharp. I generally don’t like digipaks for their tendency to dog-ear but this one has a nice visual design. If you liked ‘Flying Above Ancient Ruins’ and haven’t checked out this demo it should be worthwhile, and the Carpathian Forest cover is a really nice highlight but definitely sample it because if you’re not up for cult recording quality it could be a damn headache otherwise. If previewing tracks on Bandcamp, I’d suggest going for “A Violet Castle in the Sky” first. 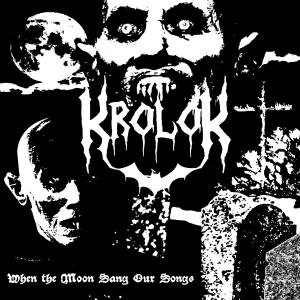