Formed in 2006 with notable members of Mexico’s death metal underground including Cenotaph‘s drummer Oscar Clorio and members of Prohibitory, Denial‘s sound changed drastically between each release likely due to a fair number of line-up changes. This compilation collects their entire discography up to this point minus their 2009 full-length ‘Catacombs of the Grotesque’. A constant on all releases is the brutal and occasionally technical guitar work of Marko Guevara who, along with Ivan Bloodhunter (also of Prohibitory), shaped Denial‘s early sound. Upon firing up ‘Obsequies of the Immemorial’ you’re greeted with what is my personal favorite track from the band “Remains” a technical death metal song that conjures Immolation as much as it does Demilich‘s twisted riffing, not too far from what bands like Zealotry have attempted since. The ‘Immense Carnage Vortex’ EP originally released by Blood Harvest in 2007 is some of the most exciting, classic stuff on this compilation and already worth the price of admission.

From there we get most recent release, also originally on Blood Harvest Records, from 2015 with the ’11°22​.​4’N 142°35​.​5’E’ 7″ EP named for the Mariana Trench, and the style here is less technical but still far less brutal than their 2009 full-length. It also includes a cover of Dream Death‘s “The Elder Race”, which is an immediate sell for me as I’m a fanatic of that band and their death metal cover keeps the original’s pacing in tact. From there an few unreleased tracks are included which appear to be extras from across the band’s history, which each track sounding like a different session. The ‘newest’ sounding track is “Deprecatio De Profundis Tenebrae”, which holds up next to their 2015 EP. Also included is a cover of Cenotaph‘s “Tenebrous Apparitions” which isn’t from their first EP but instead their first album despite it’s title. It would have fit well on their ‘Immense Carnage Vortex’ EP sessions.

The live tracks are not the best quality and kind of end the compilation with a bit of a wet fart. This is a great collection of Denial’s rarities and non-album work and I’m hoping it signals the promise of a new full-length in the near future. ‘Obsequies Of The Immemorial’ reignited my interest in Denial as it had been so long since I’d listened to thier somewhat underrated, and surprisingly brutal, first album. As I said before this is an excellent mix of their past and present and if nothing else it is worth having their two EPs in one place. If you’re looking for a death metal project that finds a space between Demilich, early Immolation with classic death metal influences this is a good place to start your Denial collection, just don’t leave out ‘Catacombs of the Grotesque’. 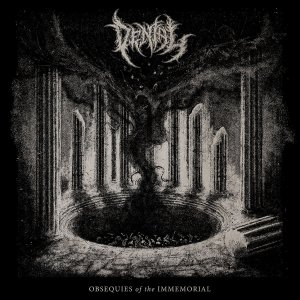