Nearing their twentieth year as a band, Italian progressive death metal band Coram Lethe make a slight return to the melodic death metal influenced sound of their 2004 album ‘The Gates of Oblivion’ though their established mash-up of ‘Testimony of the Ancients’ and ‘The Somberlain’ remains slightly in tact. Their brand of progressive death metal had long been in service to post-‘Independent Thought Patterns’ era Death that pulls influence from all areas of heavy music, often incorporating thrash and technical death metal a la Carcariass. As interesting as their extreme metal variant has been for decades Coram Lethe‘s first two full-lengths are generally rare and hard to find. A lot of interest and reference is lost when skipping ‘Reminiscence’ and ‘The Gates of Oblivion’ but the band’s overall style hasn’t evolved in gigantic leaps since their inception.

Their third album ‘…A Splendid Chaos’ was the point where I felt they’d crossed wires too much, combining ‘Symbolic’ style prog-death with Swedish melodic death metal and the result was actually kind of bland a la modern day Arch Enemy.  The amount of chugging riffs and filler on the record was staggering and I had lost interest in the band for the time being. ‘Heterodox’ was entirely different, yet largely unimpressive, with it’s deeper growled vocals hints of their melodeath/thrash sound on their first three albums. Though I liked ‘Heterodox’ some the lack of inventive bass presence was sorely missed compared to earlier releases and the rockish kick of it was blandness in a time when black ‘n roll was en vogue.

As posited earlier ‘In Absence’ retains some of their oldest sounds, re-thinks some of their previous bass guitar stratagem, and works in some more modern forms of melodic death metal. If they’d been listening to Pestilence and In Flames back in the late 90’s now they’re more likely listening to Omnium Gatherum and Quo Vadis. I like that they’re leaning towards progressive death metal on this record, though not all of it flows together and their song structures seem stuck in the in mud of early 00’s melodeath/thrash ways, much like The Crown‘s more recent work. The bass performances are a necessary chase for my mind as the atmospheric leaning guitar work often dwells in chuggy realms that don’t amount to riffs.

I find myself with a blur of unfocused thoughts when listening to ‘In Absence’. This could either be because the record itself feels all over the place, or because it’s mix of accessible late 90’s metal and modern prog-metal is slightly disjointed in effect. There are great moments throughout, still. The title track gives me hints of modernized millennial death/thrash mashed up with ‘Heartwork’ style riffing and I likewise enjoyed “Not Been Born”. “Pain Represents Pained Representatives” is my personal favorite track here, a rare spot where their love of progressive/melodic death metal really comes together beautifully as it leads into the sharply angled riffing of “Antimateria”.

The album as a whole often avoids or distracts from standout melodic statements for it’s majority, though, and this affected my retention of it. Though my write-up might smack of disinterest, it is perhaps more representative of the exhaustion I’d reached warming up to it. I was heartily invested in their first two releases when they came out and still found myself struggling to find greater value in ‘In Absence’. Outside of the three tracks I’d mentioned earlier, I’m not sure I’m wild about the record as a whole. I would absolutely recommend this to folks who like a thrashing modern spin on their melodic death metal as well as anyone who is interested in progressive takes on melodeath a la Carcariass, Quo Vadis, and Misanthrope. 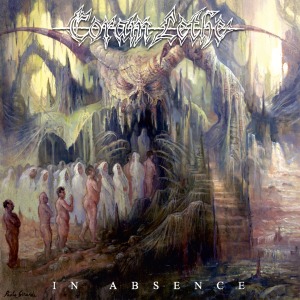