Oklahoma might be home to a history of roughly thirty thrash bands but I would venture a guess that if you didn’t live there you’d maybe only know Powerlord‘s debut and Forté if you’re a power/thrash nerd. Well, it wouldn’t be too tentative to add Volition to that short list of good thrash from Oklahoma based off of thier classic thrash inspired debut “Visions of the Onslaught’. Though the band’s earliest beginnings were largely a sloppy mess their style came straight from the pool of thrash bands inspired by Slayer in the early 80’s. ‘Vengeful Sacrifice’ had a certain At War-like fury to it even if their guitar technique wasn’t precise or particularly imaginative at the time. They’ve tightened up thier sound just enough to sound professional on this full-length without losing their frayed edges.

With thousands of thrash records to keep track of it is easy to forget the rawness of early releases from groups like Kreator, Sodom and Aggression (Canada) and those early releases had some decent level of influence upon Volition‘s sound. Were you to spin Slaughter‘s ‘Not Dead Yet’, Exumer‘s ‘Possessed by Fire’ or Razor‘s ‘Violent Restitution’ you’d be well primed to Volition’s intentions and perhaps less likely to accuse them of sloppiness. There are also some plenty of death/thrash moments on the record that blend in pretty seamlessly with the classic thrash notes not too far from what Paul Speckmann did with Abomination‘s self-titled debut. The intent is a raw and savage form of thrash metal that arose in the proto-death metal era and I’d say the best evidence of that is heard on the drummer’s previous solo project Tormentstorm which was similarly barbaric.

As with any newer thrash project still perfecting it’s rhythms Volition are at thier best within the 5-6 minute mark as they arrange riffs and work out the best verse/chorus/verse variations for their style. The guitar work and riffing flows a lot better on those longer tracks but the lead guitars occasionally have a bit of an unfitting seizure. To be honest it almost never worked for Slayer either and something more composed would have greater effect. Some of my favorite tracks here actually come from their 2017 death/thrash leaning demo ‘Crypts of Flesh’ and have been worked over to great effect. “Crypts of Flesh” in particular is a nice progression towards the end of the record after “Annihilation” and “Injection Vendetta” hint at Volition‘s death metal influences. The actual song “Volition” is a favorite of mine too if not only for it’s classic German thrash riffing that reminds me of Erosion a bit. “Justified Mortality” is basically their “Nosferatu”, a formative track they probably should have killed off just for the wobbly solo and primitive arrangement but that is really my only gripe on the tracklist.

Depending on how razor sharp you need the performances to be, Volition are either right there in the sweaty-assed ‘sweet spot’ for a thrash metal jam or they’re a half-step to far teetering on the edge of rawness. I wouldn’t worry to much about it because there’s no sense being so prissy about it, they surely bring plenty of classic thrash riffs and snarling to entertain most any old school thrash fan. 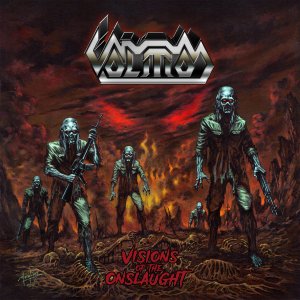