Birthed conceptually in an era of upsurging brutality and outrageous brutal death metal variations, Lecherous Nocturne arguably arrived a few years late to the mayhem with their first full-length in 2006. Had ‘Adoration of the Blade’ been possible in 2002 as a vault forward for fans hungry for something beyond ‘In Their Darkened Shrines’ it’d been an even bigger hammer of brutal death metal for the history books. And I’m in no way downplaying the music itself on their debut, in fact I’m only bringing it up to point out that Lecherous Nocturne have brought an incredible sense for arranging rhythm guitar riffs from their inception. For all of the trashcan beating snare-gong brutal death records from the mid-00’s I sifted through, Lecherous Nocturne always stood out with a polished knack for intense death metal riff storms. ‘Occultaclysmic’ is the project’s twenty plus year watermark and shows a tangible and fitting progression that compounds their musical identity further.

Ten years ago ‘The Age of Miracles Has Passed’ did similar work extending the boundaries of Lecherous Nocturne‘s sound into deeper black metal rhythms amidst their increasingly brutal attack. The sound was cranked one notch past tasteful in it’s extremity and riff style moved further from Nile-like cascades and toward their own take on the style. Looking back at how I felt about Lecherous Nocturne at the time I almost wonder why it was distasteful that they were so different from the awkward and comparatively poorly recorded Suffocation clones that were so popular in the 00’s. Revisiting each record up to ‘Occultaclysmic’ I took the same notes on each: Incredible guitar arrangements, imaginative intensity, and each album had a worse vocal performance than the previous. For whatever reason Chris Lollis‘ vocals on their 2013 full-length ‘Behold Almighty Doctrines’ were just raw, overly loud, and his jump from backing vocals to front didn’t impress me.  So, the trade off on ‘Occultaclysmic’ is losing some of Lollis‘ rousing insanity and guitar work while gaining Helgardh‘s Josh Crouse on vocals who sounds quite a bit like Lecherous Nocturne‘s original vocalist.

If you don’t mind my kick-flipping off of another Willowtip band’s back, ‘Occultaclysmic’ returns to Lecherous Nocturne‘s strongest early apex the same way that Mithras more recently took notes from ‘Worlds Beyond the Vale’ and focused on refining beyond those ideas. The record is abrupt and immediate in it’s attack allowing roughly 20 seconds of fanfare before blasting into the raucous storm of blasted-out fury. Their signature black-knifed rhythms are revealed quickly along with greater bass guitar presence. The huddled masses of outlier brutal death metal fans are given some charitable warmth and shelter beneath the hammer of Alex Lancia‘s dynamic drum work that plays off of the eruptive style of Kreishloff’s (Christian Lofgren) guitar compositions. The tracks are seamless, tautly composed, and aren’t willing to let you breathe between.

This sort of suffocative enthrallment is rare in 2018 and it invokes a sort of lineage of bolder extremity to pull it off. Comparisons don’t make a ton of sense at this point though I think a good starting place would be Angelcorpse, Vital Remains and Nile‘s broader influences that are more literally translated into bands like Hate Eternal or Necronomicon (Canada) but Lecherous Nocturne is technical and brutal on a far greater tier. It is like comparing beer to diarrhea in terms of viscosity and interest, both have their own complex processes of refinement but one is generally more intentional and artisinal. Though it might resemble the chaotic aesthetics of certain sects of influence ‘Occultaclysmic’ is uniquely placed even in the tightening plane of technical death metal existence, a sphere of influence that shrinks with every passing year. It survives without gimmickry and instead skillful arrangement that still retains and further evolves that outrageous spirit of early 00’s brutality.

I let ‘Occultaclysmic’ spin freely on repeat each time I listened to it, letting it repeat it’s full course 2-3 times each session. I found myself staring blankly in dissociative bewilderment at first, then at the compelling fury of the album artwork where mythical beasts seem to be colliding in some sort of supernatural Ragnarok. The first song that really stood out was the interlude/instrumental “Rememberance” because of the reprieve that it offered. More importantly it’s functional ‘stop’ refocused me before the volcanic burst of “Unidimensional Eclipse” that hit as a true highlight on the record. Likewise the combo of the opener and “Quantum Mysticism” really set the record off brilliantly. Lecherous Nocturne always had a strong knack for impossibly aggressive and complex guitar work and if nothing else they’ve maintained that legacy while reminding the death metal listener why they’re still impressive and relevant as the project progresses beyond the twenty year mark. Highly recommended. 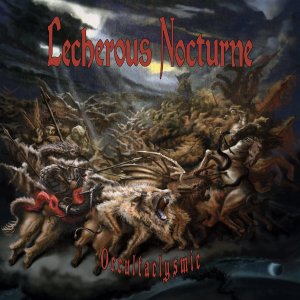