At it since roughly 1992 the Australian on again/off again death-blasted, blasphemic blackened horror that was Necromancy, then Midgard, then Utgard-Loki, then Deathcult finally settled on the name Vahrzaw in 1995. Though they’d split up by 1997 the band had released three demos documenting their mix of black metal and death/thrash metal. The ’94 demo as Midgard is one part NME and one part Slaughter in formative hardcore structures. Midgard didn’t give a fuck and Vahrzaw didn’t really give a fuck either. I mean they absolutely zeroed in on the rotten pulse of old school black/death intensity that equally didn’t give a fuck. The influence of European black metal and North American death metal were better expressed on their ‘Shadows of the Forest’ demo in 1995. At their peak of early refinement, before a ten year break, their ‘Black Resplendent Waters’ demo in 1996 was actually an incredibly promising mix of angular, aggressive death metal with rasping bursts of black metal. I’m digging through those old recordings on their bandcamp because it shows a small glimpse of how they’ve carried that original thread with integrity all the way up to and including ‘Husk’.

Ten years later the original line-up picked up where they’d left off with the ‘Futile’ EP that more or less picked up on some of the Dissection-meets-Malevolent Creation style they’d been scabbing up with their demos previous. The EP was a little out of left field  but it captured a decade’s worth of self-directed learning and improvement. Their 2007 ‘Acquiesce’ rolled over ‘Futile’ with an Angelcorpse sized tank of brutality without losing their black metal vocal tone and what I’d consider still somewhat melodic black metal nods. Vahrzaw was up to date, their sound had been standardized and it was time for a full-length. Their first full-length production ‘Defiant’ was a different beast entirely. The death/thrash elements and booming modern production, the real-ass really good riffs in their discography started in 2009. It was their most brutal statement and I’d say you could safely just jump into their discography with ‘Defiant’, though I would encourage a full listen to ‘Black Resplendent Waters’.

While ‘Defiant’ was a brutal vision of Insanity-like riff gymnastics and second wave occasionally melodic black metal transitions not too far from where Abominant was likewise headed their 2014 release ‘Twin Suns & Wolves Tongues’ introduced a new drummer and a different lease on life entirely. The overly polished brutal death/melodic black direction they’d taken after reforming gave way to a fluid and abruptly black metal dominant sound. It felt like a raw and inspired turn away from the somewhat generic structuring and production of ‘Defiant’. ‘Twin Suns & Wolves Tongues’ seemed to be the the eruption of a vision, and set of riffs, long subdued as Vahrzaw hit a new inspirational high in further exploring their black metal side metal.

‘Husk’ treads similar waters as ‘Twins Suns & Wolves’ Tongues” but does so with greater control. The death/thrash attack of their earlier releases rematerializes in better harmony with the overall black metal sound Vahrzaw found on ‘Twin Suns..’. Scott Williams’ impressive rhythm guitar skills shine through more than ever and his riff capabilities are worth examining across the band’s three full-lengths as his style doesn’t rely on being referential and he has an ear for heaviness. The influences on this record seem to focus toward a combination of early Marduk tonality as well as early 90’s Bolt Thrower stoicism. I hear the reckless, free-flowing evil of Absu or Spearhead and the thoughtful red-eyed spirituality of Dissection melted atop their love of classic death metal. At the very least those name-drops should give general idea of just how impressive the guitar arrangements are.

There are deeper layers here, an envelope full of black/death inspiration straight from the generation responsible for it’s cult status. I know that these old Australian weirdos have been at it for nearly thirty years but ‘Husk’ is a new peak in their already solid string of full-lengths since reforming. Here’s hoping they crank out several more records in the future as they’re onto some of the better black/death rhythms around. Though their messaging suggests they’re made tired and bitter cunts when surveying worldwide metal trends and habits, yet ‘Husk’ is incredibly inspired and heavy territory worth pushing forward with, regardless of who gives a fuck. Preview their stuff on bandcamp and for fuck’s sake don’t skip any of the songs. I’d go for “The King in Yellow”, “The Traveller” and “Fiends in the Aether” in particular. 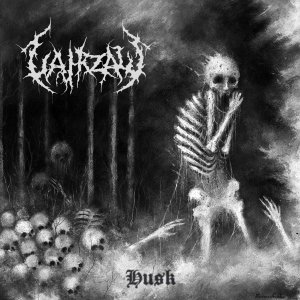