With each successive release it seems Portuguese progressive black metal band Scarificare‘s roster shifts or shrinks, yet the vision of mastermind Quetzalcoatl increases in it’s focus while his ambitions continue to expand. Progressive black metal is the only fair tag for the multi-faceted approach taken on Scarificare’s third full-length ‘Tilasm’ as the project’s sound carries a lightened load of black metal spirit through Borknagar and Arcturus influenced motion. Switching vocalists on the second album wasn’t convincing back in 2013, even if Quetzalcoatl was more appropriate than previous vocalist Crusher, and ‘Postulado’ seemed lacking in affect, overall expression, and polish. Yet Quetzalcoatl’s newly refined approach to clean vocals and layered choral moments is a real strength on ‘Tilasm’. All is elevated on this release and what could easily be a grey mush on a plate is instead a detailed, well-blended fusion of orthodoxy and progressive black metal ideas.

‘Tilasm’ is generally an echo chamber for the best moments of mid-career Setherial type black metal that is fluid yet aggressive and Borknagar‘s early incorporation of operatic clean vocals as they moved away from folkish black metal beyond ‘The Archaic Course’. That isn’t to say it is an unoriginal mix of those things but a general sketch of how the progressive and the inherently melodic black metal elements of Scarificare are presented. The compositions have a sort of pagan black metal feeling to them as they are all extended beyond five minutes and feature a strong melodic core regardless of how thrashing or doom-like the guitar ventures. As ‘Tilasm’ plays through there is a sense that the foundation of the music is slightly tuned towards Norwegian influence and aggression but without ever resting too comfortably into any other band’s established groove.

For all of the praise that Scarificare deserves in terms of varied influence and well-executed progressive/black metal that reaches ambitiously beyond the project’s previous grasp, I do think that a lot of it’s best moments blur together too seamlessly. ‘Tilasm’ is a complete herald to cosmic darkness and pagan intuition that is meant to be experienced as a single 45 minute sitting. This means that the tracklist eventually blends together into minor redundancy for the sake of it’s entirety. The last thirteen minutes of the album retreads the structures and vocalizations of the first half of the record without the same guitar interest. “Crystal Skull” and “Occult Radiance” have big, aggressive riffs and the second half of the album might have carried itself along better by closing with an aggressive track like “Regression”.

For all of the time I’ve spent with Scarificare‘s third full-length I think what will stick with me the most is the strength of second wave black metal influences and bold vocal performances. The olden ache of classic darkness keeps the otherwise melodic, anthemic style of progressive metal found on ‘Tilasm’ from becoming soft or cheesy. If you’re previewing tracks I’d say the best introduction would be the masterful “Wandering Soul” with it’s brilliant conclusion or “Occult Radiance” for it’s representation of the album’s cumulative style. 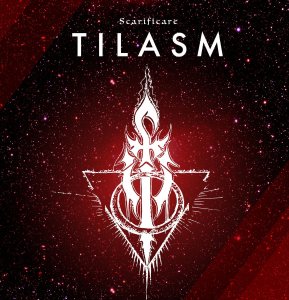