Thy Feeble Saviour‘s tale of resilience initially began in 2004 as a short lived sect of occult black metal in service to grand inquisitors Profanatica. The core of the project was Texas based musician Francisco Pulido, who had essentially left his drum seat in Sacreligious Torment to do his own thing. He released their first demo ‘And the Vomit Shall Spill Forth…‘ soon after striking out on his own. It was a raw echo of blasphemic grinding black metal with Havohej style gasps all obscured by demo tape murk, it recalled the early days of his heroes extremely well. After an oddly experimental ‘Industrial Blackness’ split with his industrial/black/noise project Jhesu Masturbator, Pulido stuck to his long-running spastic grindcore project Hypo-Christians for nearly decade before reviving Thy Feeble Saviour in 2014.

The inevitable ‘Blasphemic Disgust‘ demo roared it’s way into 2015 as if little time had passed since his first demo in 2004. The same ripping old school basement-blasted death/black metal with a powerfully demonic and gnarled Ledney style howl returning as if it’d never left. Oddly enough California death metal band Ruin had likewise returned to action in 2015 after two decades of silence and paired with Thy Feeble Saviour for an excellent split tape that hinted at the promise of full-lengths from both bands. Now, I get that you’d almost have to be a collector or die-hard demo nut to even know who either band was in 2016 but the decades long provenance leading up it it’s release only makes ‘And Darkness Fell’ more admirable an achievement.

Between Pulido‘s love for the work of Paul Ledney and ‘And Darkness Fell’ spanning 14 tracks across 35 minutes you know you’re in for some grinding, blasted old school death/black metal in the spirit of Profanatica and Demoncy. Original member of Blaspherian and one of a million Morbosidad drummers, Matt Hefner brings his aptly blasted bestial war machine drumming to Thy Feeble Saviour and finally gives the project a much needed structural anchor. Pulido’s demonic howls and death metal influenced roars are impressively layered and provide an exacting atmosphere that’d surely impress even Ledney himself. The combination of rasping storms of vocals and dynamic death/black metal drumming largely hold up because of the direction given by the inspired guitar work.

‘And Darkness Fell’ isn’t so much derivative as it is inspired by early atmospheric death metal and long-disrespected traditions of USBM. Each track clocks in under three minutes and as a result none could possibly overstay their welcome. Thy Feeble Saviour have smartly crafted an album that overflows with bursts of blasphemic blackened fire and old school extreme metal informed riffing. Though it took over a decade to take shape from the darkness the resulting album was well worth the journey getting there. 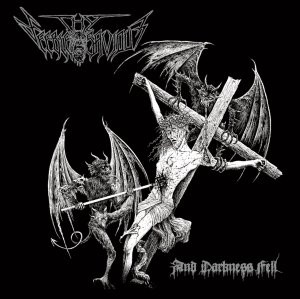 Leave a Reply to Metal of the Month: March’s Finest 15 Releases (2018) Cancel reply