Soul Dissolution‘s follow up to their well-recieved,  if not ambitious and overreaching, 2016 debut full-length ‘Pale Distant Light’ sees the Belgium based atmo-blackgaze duo focusing their talents deeper within melodic guitar lines and ultimately restrictive shoegazing. As if they’d jumped right off the October Tide cover that’d closed ‘Pale Distant Light’ and landed amidst the depressive autumn shade of Forgotten Tomb‘s ‘Love’s Burial Ground’ Soul Dissolution have refined much of the black metal patterns from drum arrangements and leaned into yearning melodic blackened shoegaze. A distinct heir of professionalism, a focused downtrodden sulk, and defeatist rock structures forge ‘Stardust’ into a familiar hopeful sourness that ultimately manages memorability.

I suppose if I was Niege or John Haughm I would feel both flattered and highly molested by the sheer breadth of imitators and variants that have followed their inspirational treatments of black metal. To think that post-black metal would become such an insufferable softness so quickly is a testament to both inspiration and it’s lowest hanging fruit. ‘Stardust’ survives this semi-beating by redefining their unfocused previous sound into such focus that it nearly becomes their own by it’s end. Most atmospheric black metal albums over-extend themselves into tedium and musical non-statements with claustrophobic tones and repetition; Soul Dissolution use their melodic death/doom inspirations and Alcest-esque structures that form into what are basically four nine minute arrangements. Each track highlights a major advancement or growing skill within the band’s approach.

“Circle of Torment” is the centerpiece meant to draw you in with it’s stream of helpless gloom in the form of melodic lead guitars and tremolo-picked sorrow. This is where their influences are made most apparent and though it could have been shaved down a minute or two it is a positive, memorable induction. “Stardust” reveals itself as the weakest track for my taste during repeated and extended listening the adjacent interlude of  “Mountain Path” represents a small (annoying) trend in atmospheric extreme metal where a field recording plays under music and it is one of my biggest peeves of late. The true reprisal of ‘Stardust’ happens in the two nine minute tracks that end it all.

“The Last Farewell” gets so riled up in it’s emotionally resonant shoegazing trotting that it begins to roil up some double-bass thumping post-hardcore excitement in it’s middle section. The lead guitars here are more restrained and less droningly obvious as in “Circle of Torment” and still manage to be equally memorable. If you’d slept through the album to this point not only would “Far Above the Boiling Sea of Life” sum things up but might suggest enough value to re-listen to the whole thing again. The chugging part around five minutes in was a great way to add some heaviness to an otherwise softy sort of song. So, if you’ll excuse the track-by-track thing a bit I mean to convey that while this does echo a lot of trends already set in atmospheric black metal, the extraneous influences pulled in from depressive melodic metal make for a professional sounding and effective release. Soul Dissolution make decent use of focused songwriting and blackgaze style for a glut of moderately satisfying post-metal guitar fiddling. 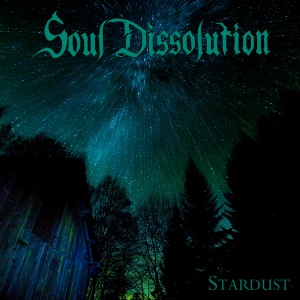