After five years spent refining their sound Finnish extreme metal-edged sludge band Black Royal have fully developed a distinct sonic personality that successfully strays further from their self-coined death/blues style. While the band were never a free-wheeling desert rock band or whatever, their two ‘The Summoning’ EP releases kept the Sabbath groove alive with punchy stoner metal influenced music embossed with a ‘Same Difference’ era Entombed death-rockin’ sound. Their debut full-length ‘Lightbringer’ is a restless tumble in the rough from self-actualized men at odds with the poison of religion and it’s curse upon mankind, lyrically speaking. If you’re already familiar with ‘The Summoning Part II” EP from 2016 then you’ll find a lot of similarities here on ‘Lightbringer’ but they’ve taken some bold steps outward in terms of song structure, production polish and overall atmosphere.

Black Royal‘s sound is an amalgamation of influences predicated upon taking accessible hard rock, classic metal, and mainstreamed sludge music’s structural influence and lightly filtering the performances through the aesthetics and ethos of European death metal. They accomplish this without ever resembling old school death ‘n roll because they’ve taken a fair grip of modern influences to stylize their sound. To say ‘Lightbringer’ has a defined sonic personality then to class it as one of the more tonally versatile and adventurous sludge records of the last six months might seem like contradictory nonsense but, hear me out. I see Black Royal’s sound as a collection of carefully blended elements not unlike what Deceased began experimenting with on ‘Fearless Undead Machines’ as they incorporated melodic death, traditional heavy metal, thrash, and their original horror-themed death metal. The amalgamation on ‘Lightbringer’ is just as thoughtful and strong.

‘Lightbringer’ is initially a burly, savagely hybridized sludge beast with a death metal head and a stoner rock fist that can really rise to power when it needs to. Yet throughout it’s spin I could hear soft-balled nods to early Mastodon (“Pentagram Doctrine”), Faith No More riffs (“The Chosen”), and heady Warhorse-like aggro-sludging that rarely felt self-conscious about how it rocks. The underlying alternative rock structures barely creep into their relatively modern sludge metal sound, lacking some measure of boldness. As a result several of the tracks bleed together due to the lack of differentiating guitar sounds/textures. The result is a satisfying album that also leaves a bit of charcoal on the tongue with a bitterness that never really lets loose of it’s thematic darkness and rebellion. The best example of this is probably “New World Order”, which is not only a thematic peak in terms of the album’s message but also an all too brief leap into different vocal sounds and heightened melodrama which it turns out they are actually quite good at.

Though there are plenty of sword-hurling doom metal riffs driving the Black Royal ship often times the processed-sounding vocals take the wheel too strongly and their melodies aren’t always imaginative as they are collages of atmospheric intent. The slightly double-tracked processing and barked delivery give ‘Lightbringer’ an old school Ministry like layer that is obtuse in the album’s middle section. That tonal issue with the vocals is fleeting though, as ‘Lightbringer’ is lyrically very satisfying when I can make out their intentions. Anytime theology is rightfully throttled and pissed upon as the cause of world damning blindness with side-effects for all, I’m fully in. “Self-Worship” is not only on point in terms of expressing their lyrical themes, and essentially conveying a major tenet of Satanism, but the song itself is musically a grand highlight on the album. In fact it is the best song to sample first here, though the band want you to experience the whole thing in succession, because it shows musical growth and inspired direction from a band that was previously otherwise middle-of-the-road in quality and affect. The rest of the album will flow naturally from it’s opening fanfare and likely impress sludge and death metal fans alike with it’s doom-tinged riffs and overall impressive message. 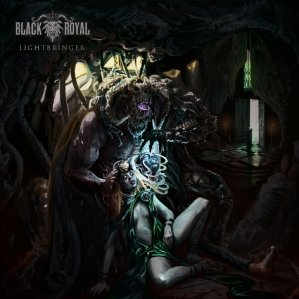