Though England is rife with notable export of all sub-genre the kingdom’s contributions to doom metal in the 90’s left some of their countrymen’s biggest impressions to date. Vitally included in the traditional doom metal sect is Solstice with their classic ‘Lamentations’ release from 1994 that had a certain ‘From the Fjords’ style epic heavy metal mist to it combined with heavy doom metal riffs on par with the similarly underrated Revelation of the time. The draw for me went beyond the majestic guitar arrangements and straight out the mouth of Simon Matravers. His vocals rang within the soul with their determined dejection and held that same timbre on the likewise brilliant ‘Halycon’ EP from 1996. If you’ve connected with the vocals of Patrick Walker (no relation) through Warning/40 Watt Sun, then you should be listening to ‘Lamentations’ and ‘Halycon’ right now. As I worked through my thoughts on the band’s discography and what it’s meant to me over the last fifteen or so years I couldn’t skip lightly over the importance of the vocalist, as impressive a songwriter as Richard Walker absolutely is.

For 1998’s ‘New Dark Age’ the project took a notable turn away from pure doom metal and towards one of the heaviest, darkest traditional metal albums ever recorded. Walker’s fusion of doom metal, epic heavy metal, and folk metal elements alongside H.P. Lovecraft inspired lyrics amounted to one of my personal favorite records of all time. In fact it is odd to have seen folks online talk ‘White Horse Hill’ up so much because I’d very much found myself on an island as a fan of this band for the last decade plus. Few people I knew had bothered with Solstice until they’d released their ‘Death’s Crown a Victory’ EP in 2013 and released their discography on bandcamp around 2014. The CD copy that I bought off of eBay years ago cost me upwards of 60USD and I couldn’t fuckin’ force the shit on folks. Well anyhow, that second full-length featured Morris Ingram on vocals and his tone was similar to Matravers‘ with a slightly apathetic, less melodramatic delivery. He was new, but his style fit very well into the heightened dynamics of ‘New Dark Age’.

Well, it wasn’t a twenty year wait for new material but rather fifteen years and three compilations worth of fiddling about until ‘Death’s Crown is Victory’ brought in yet another new vocalist and a decade’s worth of updated sound. The two ten minute tracks that bulk the 2013 EP were epic heavy metal with a far more bellowing, operatic vocal thanks to former Arcane Sun vocalist Paul Kearns who is also at the center of ‘White Horse Hills’ more restfully epic storm. I’ll be honest here, with a new vocalist and a big modern sound nothing about ‘Death’s Crown is Victory’ really resounded as Solstice compared to their 90’s output and I wasn’t all that excited by it. Great that the band still existed and was working on new material but it felt like another project by an old name. I can walk back my thoughts a bit when listening to ‘White Horse Hill’ a bit, though.

Of course if you’ve only heard the melodic doom/death of Arcane Sun‘s self-titled debut from 1998 you’d suspect that Paul Kearns could be an alright fit for Solstice but that album is by no means good outside of some crooning bits. But if you’re like me and you took the time to hunt down their criminally damned ‘Fade’ album, recorded in 2000 and released in 2012, you’ll understand why he fits better than expected. How much of that thought process and research makes sense twenty years after he performed on an unreleased album? Little to none, and going off of ‘Death’s Crown is Victory’ I still felt things sounded too different. Now that we’re in 2018 I’ll eat my thoughts and words a bit, thought I think he’s a bit close to A.A. Nemtheanga and it ends up sounding like a very good Primordial moment on the opener “To Sol A Thane”. A high compliment, really.

It wasn’t until “Beheld, A Man of Straw” that Walker‘s songwriting and a gentler, subdued vocal from Kearns that ‘White Horse Hill’ began to click as a Solstice album for me. It isn’t a return to ‘New Dark Age’ so much as it is a re-envisioning of it’s core approach. In place of folkish, pensive moments we’re given rousing epic heavy metal that fits the vocalist’s more dramatic performances and greater range. If Solstice had a couple of gentle warblers before, now they’ve got a bellowing cock out front and that isn’t such a bad thing at all. The title track is absolutely the centerpiece of the album with phenomenal melodic lead guitar work and a drum performance from Rick Budby that outdoes even some of his work on ‘New Dark Age’. With successive listens I found increasing value in this record that I’d initially been unsatisfied with due to the previous records leaving such a mark with me. I can say I find it ultimately just as redeeming a set of songs as anything previous and the updated sound has done nothing to rub away the inherent spirit of Solstice’s previous work within ‘White Horse Hill’. My only gripe is that I could have done without the intro “III” and “Gallow Fen” and left it around 40 minutes. It is a fine achievement for Solstice and a fantastic album from epic doom metal’s most underrated ancient ones.

NOTE: Physical copies not available for pre-order at the time of this review. Check Iron Bonehead if in Europe and Dark Descent if in the US. 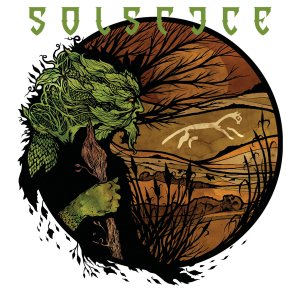