On their 2016 debut EP ‘Reign of the Depraved’ Australian death metal band Depravity resembled a brutal death metal band with a wide swath of influences ranging from Drawn and Quartered to ‘Domination’-era Morbid Angel. Their urgent and blasting approach to death metal reminded me of earlier Vile albums pre-‘Metamorphosis’ and the second Kronos album. The band have conceived and even more extreme and blistering vision of brutal death metal on their debut ‘Evil Upheaval’ that never mires itself in overt technicality or mindless brutality. Anyone yearning for the loud, brazen antics of early 00’s brutal death metal that was largely devoid of deathcore riffs and science fiction concept albums will find endless inspiration in the blasphemic force of Depravity’s death metal.

With several members cutting their knuckles in long-running melodic death metal band Pathogen and the black/death/thrash of Malignant Monster, the brutality of ‘Evil Upheaval’ is unexpected. Though you can hear some of the same Morbid Angel and thrash influenced guitar work briefly in parts of Malignant Monster‘s ‘Yours In Murder‘. The guitar work eventually pulls from Spawn of Possession as much as it does Diabolic or Angelcorpse and finds it’s own claustrophobic push by the end of the album. At the center of the album is a machinated, unholy performance from drummer Louis Rando who has piled a prolific load of blasphemic extreme metal onto his plate since 2011 anchoring bands like Bloodlust, The Furor and Impiety. His drumming leans towards brutal death metal style than his contributions to black and thrash metal hybrids, though his skill set isn’t a far cry from what he’d done on ‘Cavalries of the Occult’ just far more blasting double bass.

Of course the production is unavoidable here with it’s enormous sound thanks to the folks at Hertz Studios responsible for albums by Behemoth, Decapitated, Vader and hundreds more. If you’re a big fan of groovin’ modern death metal like Abysmal Dawn and Vile yet you prefer a slight nod of millennium-spawned brutal death metal, blackened death metal, and blasphemic ‘Gateways to Annihilation’ style guitar solos there’s a lot to like on ‘Evil Upheaval’. 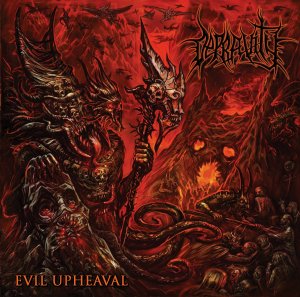