This Vancouver B.C. quartet have evolved from stoned immaculate doom youngsters to self-actualized, forward-leaning heavy metal humanists across a decade of hard work. Their fourth full-length ‘Livin’ Oblivion’ hits the eject button on the sleepy, lumbering doom of their first two albums and instead polishes the hard rocking speed metal-infused sound of their previous record ‘New Waste’ to great effect. With notable strides made in both songwriting, guitar work, and vocal performance it is the definitive moment for Black Wizard‘s already impressive discography.

In sound and sub-genre classification the only group that could be successfully compared to the style heard on Black Wizard‘s latest album is fellow Listenable Records label-mates Saviours and their 2015 album ‘Palace of Vision’. Both groups use their most relevant frames of reference within heavy metal, stoner doom and thrash metal to create propulsive and inspired heavy music. None of this conglomerated style could work without the ever-evolved voice of Adam Grant who has gone from a ‘middle of the mix’ sort of vocalist to a righteous and impassioned lead instrument. He has the ironic snarl of a doom metal howler and manages to be incredibly expressive within a reasonably limited range.

In many respects ‘Livin’ Oblivion’ reminds me of an old NWOBHM album as it kicks off with the wailing leads and hurried stomp of “Two of These Nights” and vaults right into the sped-up “Feast or Famine”. Faster, more aggressive tracks like “Feast or Famine” and “Portraits” add extra dimension to the full listen and wouldn’t feel completely out of place on an old Red Fang or Cauldron record alike. Though variety is a great strength of ‘Livin’ Oblivion’ it’s deepest connections come from the band’s much improved songwriting. The grandiose introduction and heady heavy metal riffing of “James Wolfe” gives Grant room to howl out a defeated, bitter tale that highlights the first half of the record. The title track is another of many standout songs featuring dual-lead guitars and an amazing chorus. Likewise “Heavy Love” gives some nods to Black Sabbath‘s “Children of the Grave” in some it’s verses, which couldn’t more more appropriate considering the lyrical themes of ‘Livin’ Oblivion’.

The overall lyrical focus of the album points two fingers with equal concern. One towards the backwards thinking oligarchs of the world deriding the positive future of human beings. As well as another sympathetic hand towards the overwhelmed and, as a result, defeated youths who’d party their minds off into escapism. I think a lot of what they’ve written here just generally speaks to those who’ve dealt with addiction, oppression, and helplessness. I rarely bother to follow the lyrics on a metal album, much less any band ever labeled ‘stoner’ anything, but this one was easy to connect with because of it’s timely and equally timeless messaging. Black Wizard have crafted a major league release in great service to heavy metal, stoner doom and speed metal alike. I have to give ‘Livin’ Oblivion’ one of my highest recommendations of the year after spending a month with it neatly tucked into my brain. 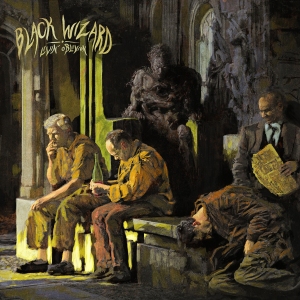