If ‘Thrash Zone’ era D.R.I. did a split with ‘Realm of Chaos’ era Bolt Thrower back in 1989 it’d have sounded a lot like this split 12″. Though I’d say Gatecreeper are closer to ‘Warmaster’ in style these days and Iron Reagan have sped up their groovy shout-along hardcore punk closer to Municipal Waste with some vague Nuclear Assault-isms here and there.  In fact their raging political hardcore steals the show on this split coming hot-as-fuck off their 2017 full-length ‘Crossover Ministry’. Iron Reagan are absolutely at the top of the crossover thrash game here compared to their 2014 split with Exhumed, where they were still baking off the fumes before ‘Tyranny of Will’ exposed them to a bigger audience.

Hey, that isn’t to say Gatecreeper are slouches here. Their emulation of old school death metal is just as polished as Iron Reagan’s yipping crossover worship, but they haven’t really transcended their influences or really taken a step beyond what they were doing on their debut ‘Sonoran Depravation’. While it might be a stupidly competitive observation to make, their label mates Genocide Pact have upped the ante on this style considerably with their second album released a couple weeks ago and tracks like “Dead Inside” feel like retro-death tomfoolery by comparison. That said, their side of the split will make Bolt Thrower fans pretty happy on “Dead Inside” and “War Has Begun”.

I couldn’t be happier with 18 minutes of this split as two of the best, top-of-the-line late 80’s early 90’s extreme metal influenced acts come together. The split serves as a great introduction to both bands if you’ve never heard them before and shows Gatecreeper is still alive and kicking in between full-lengths. I might be a little biased towards the energy of Iron Reagan on this one, so definitely recommended to their fans, but the whole thing has been a good, clean full listen over the last couple weeks. 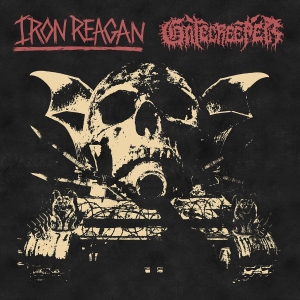