If you’re gonna do the whole throwback 80’s hardcore ass crossover thrash thing it has to either carry itself with the eruptive quality of classic hardcore punk or invoke the classics in a new way. Pissed Regardless were a close study of explosive and sarcastic crossover a la D.R.I. on their self-titled demo. That demo was a thing of beauty as it took from the Ludichrist and Beowülf school of punk-thrash where crossover bands essentially took riffs from heavy and extreme metal of the time and wrote songs around a ham-fisted version of that riff. Hearing a hardcore punk take on Slayer‘s “Dittohead” on “Easter” from Pissed Regardless was enough to sell me on their take. After losing their way with a weirdly polished production and different vocal approach on their 2015 debut EP ‘Force Fed Gods’ the band have returned to their original vision on ‘Feed the Birds’.

New to their sound on the EP are some heavier beatdown influenced moments on “Empty” and “Trust No Pulse” that pull from the metallic edge of early 90’s hardcore, though they’re just short nods to the style. “Feed the Birds” and especially “No Reprieve” recall D.R.I.‘s ‘4 of A Kind’ but tuned up to post-Municipal Waste hardcore standards. “Lipstick on a Pig” has this chuggy riffing that reminds me of the first two Obliveon records a bit, too. I love this sub-genre in general and Pissed Regardless whip out a dense and authentic 11 minutes of thrashing hardcore punk. Best crossover-core I’ve heard since Hummingbird of Death late last year. 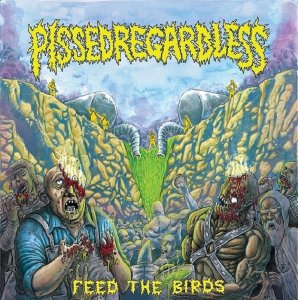