Imagine what sort of double nerd you’d have to be to combine the melodic death metal of mid-to-late 90’s In Flames with Proscriptor (Absu) style vocals for a concept album centering around Frank Herbert’s Dune. Yep, and imagine if you got Swedish metal producer of legend Fredrik Nordström to mix the damn thing. Take it from a guy who wrote a five page essay about how spice was actually worm poop back in high school English, it’s a cool idea. ‘Eyes of Blue Light’ is that album but let me backpedal on the In Flames thing a bit, while Necropanther definitely incorporate that style of guitar leads into their music they go far beyond the poppy Swede-ish Maiden-isms of 1997. Modern power/heavy metal flourishes highlight their sound with similar execution to Skymning‘s long forgotten underground classic ‘Stormchoirs’.

This style makes sense for a group of guys who kicked it on early Havok demos and banded together to back traditional metal band Moore for a couple albums before transitioning to their own project as Necropanther. Though you could argue for some thrash metal influence in it’s core sound, ‘Eyes of Blue Light’ is very much it’s own old school melodic death metal darling. I sorta wish I had the lyric sheet and a definitive answer to ‘movie vs. Syfy channel mini-series’ to better delve into the concept of the album but I get enough of a kick out of just the song titles and the epic melodeath happening within to leave with a great impression.

If the croaked vocal tone of the first song is an irritation for you, he lightens up a bit as it goes and incorporates less of a black metal hiss through most of ‘Eyes of Blue Light’. His vocals return to the style of their self-titled 2016 album quickly. It was hard to focus on Necropanther for the first listen because I kept pausing it to go listen to bands that made such a stamp on this sound back in the late 90’s. Just regenerating my interest in bands like Eucharist and Sacrilege made it well worthwhile. That uphill climb towards distinction that retro-melodeath style brings is well fought here, as the lead guitar work here is ultimately just as memorable as the ghosts of past melodeath with the advantage of modern production and a grasp of major key use beyond that of 90’s metal. ‘Eyes of Blue Light’ also benefits from a really professional polish, where I’d say it is their ‘Whoracle’ to their self-titled’s ‘Jester Race’, if that makes sense.

I can highly recommend this album to fans of melodic death metal, it has it’s stylized quirks but they’re all purposeful idiosyncrasies that fans of the style should enjoy. Though I wish the cock-shakin’ lead guitar prowess continued a bit more in the tracklist beyond “Shai-Hulud” the second half at least escapes redundancy by shifting even more towards thrash and classic heavy metal to keep things interesting. It feels like a cohesive tale of two halves only because the heavy metal of “Waters of Life” and the thrash kick beyond “House Atomics” anchor enough interest towards the end. Worth listening to! Any of the first four tracks should impress you enough to know if you’re going to be into it. 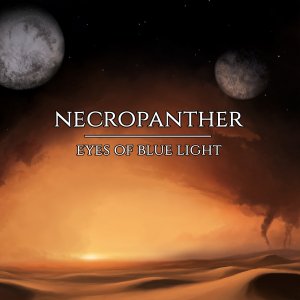