The personal stories and small gameplay conquests leading up to the formation of the fabled Assassin’s guild in Assassin’s Creed: Origins echo the same failures and triumphs of previous Assassin’s Creed games. What got old is now new again with a beautiful rendering of ancient Egypt underneath a dynamic main character, Bayek of Siwa, who is at once chivalrous and likable as he is vengeful and irrational. Bayek is a good lay, a devoted husband, a cat-petter, an old school detective who follows the laws of old, old Egypt. Egypt itself is a main character in and of itself, as it’s shifting occupation and tyrannical rulers writhe like a dog overwhelmed with fleas. The historical fiction promised so heartily in the first two Assassin’s Creed games weasels it’s way into the side-questing of Origins with such an exhaustive vigor that you’ll be muttering “Neket Iadet” under your breath the next time you’re cut off in traffic.

In fact my own personal interest in Assassin’s Creed as a series was the emphasis on historical fiction and reproduction of ancient civilizations within videogames. The stories of the first four main series entries played out like less-sexy John Jakes series akin to the Kent Family Chronicles, or at the very least riffs on writers like James Clavell. One of my favorite Clavell novels is the 1200 page ‘Whirlwind‘ and it’s rigorous description of Iran and the Persian Gulf gains new visualization within the overlaid skin of AC: Origins. Because historical fiction can be so relentlessly tedious, some of this comparison is meant to chide Assassin’s Creed for baking very little hand-woven intrigue into their stories a la The Witcher series. The sex is respectful, the friendships are stiff, and revenge is such a hot topic in Origins you’ll think Bayek is an irritating Kratos-like turd towards the end of his arc across Egypt. Just as Nioh gave me Romance of the Three Kingdoms when I wanted Gai-Jin/Shogun, Assassin’s Creed: Origins provides equally bland plot device.

Once I found the Golden Wolf I stuck with it despite finding many similarly cool weapons. Critical hits makes combat go fast and health restoration made ti simple as well. Note that I’ve upgraded every piece of armor and weapon damage, that was the first thing I did once I left Siwa and Alexandria. I mostly stuck with Hunter and Predator bows, both shoot fire arrows.

Full synchronization and most of the skill tree filled up. You can still grind skill points beyond the level 40 cap, you only stop gaining levels. Expansions raise the level cap, but I don’t care about DLC in this case.

Of course the low fantasy sci-fi of Assassin’s Creed’s ‘present day’ storyline continues vaguely as Layla, a lesbian (right? did I read that wrong?) Abstergo employee hacktivism-ing her way to show Abstergo that she can use the Animus to… Well, who the fuck cares? None of it is explained well enough and none of that shit made sense to begin with. The present day stuff is so poorly executed and brief that it should be optional. Spoilers, one of Desmond Miles’ (first four games’ present day protagonist) relatives recruits Layla into the Assassin’s Guild after she witnesses the extended cut-scene narrated by Bayek’s wife, Aya that makes up the end of the game. I’ve spent countless hours in these games’ worlds and the worst, absolute most shit part of it all is being torn out of the world for fucking pseudo-scienced sci-fi lite modern day nonsense.

All 125 quests of the main game complete. 2 deity specific limited-time challenges for loot, these are time based and change every week. 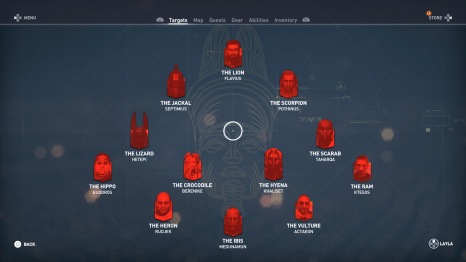 With all of the Assassinations complete I have to admit most all of them were uneventful beyond Khaliset, and Taharqa.

Well, onto the game already! Fuck. I was beaming for the first 20-30 hours of Assassin’s Creed: Origins and then I played 40 more hours of it. 20 hours in I’d seen every useable vehicle, every bit of unique gear, every animal I could hunt, and I’d nearly maxed out all of my gear upgrades at level 22. By then I was invincible and the old, damned repetitive Assassin’s Creed had started to peek through the cracks of Origin’s lovely Assassin’s Creed IV: Black Flag-like veneer of vigor and zeal. Combat in Assassin’s Creed has evolved once again away from the Batman: Arkham Asylum floaty lock on first innovated with those ragged old Prince of Persia games on the PS2. This time it feels like an incredibly simplified take on third person character action RPG gameplay of games like Nioh and Dark Souls. That is, Origins offers the same feeling as fully leveled up and powerful characters in those games thanks to weapons that have magical properties like regaining health after kills, fire and poison enchantments, as well as separate effectiveness for things like critical hits or adrenaline gauge regeneration. Adrenaline allows for special weapon-type specific attacks that often amount to 3-4 the damage of a critical hit. It will likely be too easy for a lot of players as you’re not exactly swarmed with twenty or thirty guys to the tune of Middle-Earth: Shadow of Mordor and the many melee and ranged weapon classes give a pleasing amount of customization to the combat.

Turning Assassin’s Creed into an action RPG has taken several games, with a few even offering steps backwards away from RPG elements, but it is a shallow and simple Ubisoft take on the action RPG. You’ll solve puzzles within tombs even less vexing than the simple tombs of Rise of the Tomb Raider, and this feels like a return to the caves of Assassin’s Creed: Brotherhood and II. You might be overwhelmed by loot drops and found weapons, the giant map, and the absolute flurry of side-quests on the giant map at first… but in reality the side-quests are all rote actions that amount to detective work that leads to murder or just straight up murder by law. In fact even when repeating the same side-quests Origins’ Egypt feels more and more like a substantial world with unique locations as you progress through different biome changes that feel natural. It wasn’t until I started to re-encounter procedural enemy mobs and respawns that it began to feel like a single-player MMO action RPG with bot-mobs and murderous fetch quests. The giant map gives level recommendations for enemies in each area and as such you’re gated from venturing into them for fear of being a one shot kill from even the wildlife. Once I reached level 40 and ventured out I realized there are enormous swathes of empty desert and one section is simply a giant mountain with no real reward for climbing it.

So, I spent 70 hours running across the desert, dug through some pyramids, and dove into countless sea-wrecks because the movement in Origins feels amazing and it is completely streamlined with minimal ‘sticky’ character syndrome that plagues open world games like Infamous and Assassin’s Creed.  Every AC game still has the same issue with climbing where it just stops registering handholds once in while and you’re stuck pushing up to climb up until you get some phantom momentum to keep going. That said diving, driving chariots, ramming wildlife, auto-lock on, combat, tomb exploration, and even looting all feel better than any AC game before it. There is just too much game here and not enough of it is new or exciting beyond a good 30-40 hours of becoming strong enough to finish the story and occasional side-questing. Of the 127 quests I completed almost none of the combat tasks were challenging and Origins really only shined in terms of exploration and item/weapon collection.

Voice acting removes a full point from my score. Not only does it seem they’re using the same voices they’ve used in every Ubisoft game for the last ten years but the automatic rambling of crowds is incessant and rarely contextual. I walk past some kids playing and briefly run, and they scream? Why do the Greeks, Romans and Egyptians all scream in fear when they see a man running? Why does every Greek soldier and Egyptian guard tell me “You’ll pay for that.” over and over again even though I never once died to an enemy soldier in the game, ever. Why do the Greeks and the Egyptians have the same accents? Why do the Romans sound like the Italian townsfolk from the second game? Even Bayek’s voice actor is kind of terrible in his inconsistent inflections and need to shout in the middle of half of the conversations he has. Aya is even less developed as a character and her motivations for forming the Assassin’s Guild at the end of the game feels like they’ve tacked her leadership into the game for no apparent reason. Why wouldn’t Bayek form the Guild? It is so odd that such a proactive guy who did the bulk of the work ends up having no goals besides unrequited love at the end. It deflates his hero and machines hers into a likely side-story option later on. Either another game or additional expansion.

It still feels great to rip through a long, drab list of Ubisoft style uninspired side-quests and ‘towers’ in Assassin’s Creed. The forts introduced beyond Assassin’s Creed II have evolved into Far Cry style outposts to be cleared and checked off the list. They repopulate ad infinitum with the passage of in-game time and allow for grinding for gear and experience points if you feel the need to. I think Origins might be the game that marks a point where I really have to learn to shake myself of being a completionist in games that tack on useless filler to extend the experience. 70 hours of a $60 game is pretty great but I would have been ok with 40 hours of the best parts. There is no freakin’ way I’m paying another $19.99 for two more expansions when the game is this damn big already. I guess I couldn’t really recommend this game without a fair warning that it makes a great first impression then stretches that good faith very thin by the time you’re finished with it.

So, at the end of the day when looking past my series-spanning gripes Assassin’s Creed: Origins has the spirit of a long and dry 1200 page historical fiction book. If you couldn’t sit through a slow page-turner that’d describe a sword a hundred times before it even mentioned the milkiness of a tit, then it might not be for you. For my taste it was a good game that overstretched a few great innovations for the series. I can’t be too down on the game, though, because much of my personal enjoyment was hindered by a need to be a completionist. A casual hack, slash ‘n sneak through Egypt is still highly recommended and it’ll be an amazing value once it all goes on sale.