This Czech death/doom band’s third full-length finds the project attempting it’s most ambitious and theatrical vision amidst it’s progression towards their increasingly distinct sound. It may have been the creepy doll on the cover or the Gothic metal overtones of ‘Cupio Dissolvi’ but I’d never really given this band’s sound a chance until ‘Epigrammata’, completely skipping over ‘Et Nihilio Et Nihilim’ in the process. In fact in preparation for analyzing this record I began to admire those early albums far more than I though I would. Both were logical and necessary steps in a progression towards it’s grandiose sound and introspective poetry. ‘Epigrammata’ further develops the spacious and dramatic setting of ‘Et Nihilio…’ yet finds stronger conceptual form that goes beyond the downtrodden lyricism of earlier work.

Despite the Age of Storm-like death/doom crawl of ‘Cupio Dissolvi’ the keyboard/synth heavy side of Et Moriemur was originally akin to the ‘dark metal’ of the early 00’s and the more gothic edges of funeral doom metal. Their second album was content with what was essentially a less melodic take on Anathema‘s ‘Pentecost III’ this latest record is impossible to compare. The vocal performances on ‘Epigrammata’ soar from Rotting Christ-esque rasps to heavy death metal growls on a dime, all highlighted by what appears to be a cathedral full of Gregorian chants throughout. Extended atmospheric funeral doom passages on songs like “Agnus Dei” highlight the album’s hour long playtime with mournful chorale and melody more resonant than most funeral doom influenced music.

The only real gripe I have with this new and impressive undertaking is that it really only conveys one extended note of tonality throughout the piece. That isn’t to say that it isn’t dynamic, most of Et Moriemur’s strength is actually the dynamic interplay between the thick, despondent atmosphere and the heroic hymnal tone of the record. The composition is all so focused on exploring that existential dread within the confines of equally paced five minute gothic metal influenced funeral death/doom and thusly begins to drone on after about a half hour. That said, ‘Epigrammata’ is a beautifully dense set of dark and evocative doom metal songs to sit and soak in. It’s grandiose production sound is unique and nothing short of the soundtrack to some sort of enormous, extended celebration of humanity’s end. I’d recommend this as a sort of restful alternative to funeral doom, or the more recent work of The Ruins of Beverast. 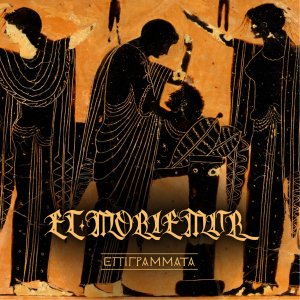