Old school death metal is a tricky beast to fuck with because so many bands’ toe-dipping into plagiaristic worship ends up lost in a direct comparison to a handful of original bands. Anarchos doesn’t escape the well trodden path of what’d been done before but, much like Coffin Creep, they do make a good go at raw and heavy old school Swedish death metal. Anarchos themselves aren’t Swedish though, they’re from the Netherlands and feature shared DNA with the revival of Eternal Solstice, Ulcerate Fester (you need to listen to ‘Sonatorrek‘!), as well as the now defunct and somewhat similar Burning Hatred. Their ‘Descent Into The Maelström‘ EP was buzzing, downtrodden mid-paced death metal and it seems thier debut full-length set out to throttle the pace a bit more and amp up the guitar tone. As a result the almost Finnish death metal sound of songs like “Sarggebert” have taken a backseat to heavier, faster Swedeath moments.

The first thing you’re hit with when firing up ‘Invocation of Moribund Spirits’ is it’s neck-snapping, jacked to 11, obliterative buzzsaw guitar tone. Though they deftly zig-zag through punkish lumberjack death metal a la Grave and Fleshcrawl on the first third of the album, it isn’t until the band slows down that they kick out their best jams. The extended tracks make the best use of that big and burly guitar sound with doom-laiden mid-paced riffing and guitar solos. The complete experience of the album is a bit front-loaded, though, as all of the excitement and fury happens in the first ten minutes; ‘Invocation of Moribund Spirits’ has all of Anarchos‘ more interesting mid-paced riffs shoved towards the conclusion of the album.

The doom riff outro to “Dominions of Blasphemy” leading into the 12 minute slow-build of “Cold Funeral” is probably the most valuable example of dynamic tension in Anarchos’ death metal music. “Initiating Lawless Rites” likewise channels some of that death/doom I know they’re capable of to great effect and showcases that gnarly guitar tone’s strength in slower melodic riffing. If you love what bands like Horrid and Mass Burial are doing with ye olde Swedish death metal guitar yet you prefer your chugging a nudge towards early Grave then I’d highly recommend Anarchos. Hell, I’d almost recommend it just for the album art. 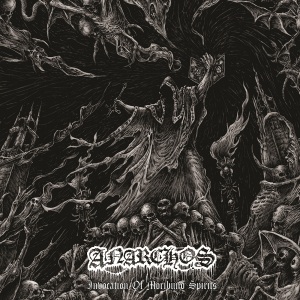