Pillärs are off to an impressive start with their debut full-length that shakes loose like a dinosaur tooth as it jumps between barreling ‘Word as Law’ style metallic crust punk, ripping angular hardcore, the screeching diesel sludge of Eyehategod and the overdriven snowblower doom of early Electric Wizard with a touch of High on Fire in between. Those points of reference are both the draw and the detriment of ‘Abandoned’ as the album seems to pluck the most memorable riffs verbatim from a few of those bands and simply recreate them as transitional moments between their crustified sound. Of course it isn’t plagiarist, I’m not dogging them on that level, I only found the influences very obvious and very separate from one another on an album that doesn’t quite find a unifying medium to make the slurry of it all pop hard as it might.

The first three tracks here are explosive and basically offer up a wet dream of hardcore sludge doom that sums up everything I loved about dirtbag music when I was in my early 20’s. ‘Abandoned’ speaks so perfectly to those sensibilities on those first three tracks that I almost regret hyping myself up before the second half of the record. “Last Rites Nothing Left” blows away everything after it with it’s ‘Dopesick’ middle riffing and the Unsane-ish hardcore of “Through the Storm” is equally exciting. The third track “Pale Horse” yanks out it’s first Matt Pike-isms to great effect and from this point ‘Abandoned’ kinda lost me.

Once “Walking Ghost” gets going it sorta goes neo-crust a bit, not too far from Ancst, and then it gets wonky with the bassist’s vocals clashing with the odd reaching melody of the song. It is a song I ended up skipping every time after the third listen and I did the same with “When Towers Fall” and the closing track. Those longer compositions are too ambitious and the secondary vocals aren’t used to great effect. It isn’t all flops on the B-side though as “Beneath the Ice” kinda resembles a death metal Sick of It All and rips throughout. I think Pillärs are at thier strongest when they’re full-speed and riff driven. When it doesn’t work (the dual vocal sections) it really doesn’t work and after several listens it lost that initially compelling gravity. 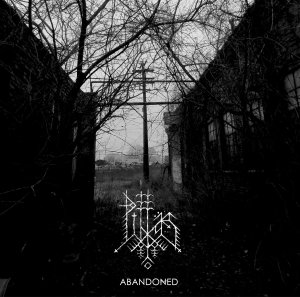