Skyclad struck inspirational gold combining elements of folk and Celtic rock with thrash metal on their debut and were quickly back to recording this notable follow-up album that brought a far more accessible take on their sub-genre innovation. In fact this combination of Sabbat and Satan members would spawn a new and impressive album every year for almost a decade. On “A Burnt Offering for the Bone Idol” the thrash metal style of the previous album is still present but the thrash riff no longer drives the music like it did on ‘Wayward Sons of Mother Earth’. Instead the music of ‘A Burnt Offering for the Bone Idol’ features a prominent violinist at the center of melodies for the majority of the tracks. While the concept of violin and guitar rarely works in the avant-garde metal sense, here it serves as a driving lead guitar would when ensorcelling melody.

Because I’m not comfortable crediting the invention of folk metal with Isengard‘s 1991 demo, this album was essentially the invention of Folk Metal proper. This is despite the fact that Skyclad is to this day the only band to sound like they did on this album. It is idiosyncratic, accessible and well written music. To see the group tastefully cling to their now scantily-clad thrash guitar ideas while integrating classic heavy metal and violin jigs together in an almost progressive fashion was massively inspirational for folk metal. That said, any thrash fan might want to sit the rest of their discography out after this one because they would soon start to focus more emphasis on violin driven melody and the vocalist’s increasingly impressive lyrical melodies rather than big metal riffs and guitar solos.

‘A Burnt Offering for the Bone Idol’ is the sort of thing an open-minded classic thrash fan will enjoy quite a bit, still. “Salt on the Earth (Another Man’s Poison)” is arguably heavier than most of their first record and my favorite track “R’Vannith” combines that aggression with the violinist’s virtuosity to greatest effect. In fact the violin is so successful here because it’s placement is always organic and in service of central melodic or rhythmic transition.

Martin Walkyier had already found his bitingly sarcastic and cynical voice in Sabbat but his lyrics took a turn towards even more personal and thoughtful examination of social issues rooted in history and politics. His voice is distinguishable as the guy who sang on ‘Dreamweaver’, though. Thankfully their discography wasn’t pure lyrical outrage and his increasingly pun-driven wit would come to form the personality of Skyclad with each successive recording. Skyclad set a very high bar for folk metal and if you’re curious about it’s inception and style this is the album to start with. 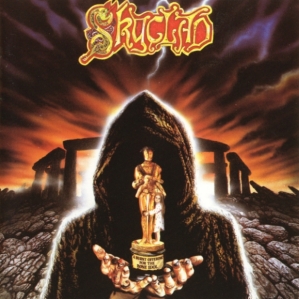