After a seven year hiatus traditional heavy metal band Lechery have finally released their third full-length and very little has changed since 2011. Their ultra-traditional approach to heavy metal on ‘We Are All Born Evil’ is the sort of polished Swedish power/heavy metal you’d expect from a Century Media band back in the early 00’s. Though I might argue that Lechery’s anthemic style of mid-paced metal is somewhat generic next to groups like Dream Evil or even Powerwolf. My own personal enjoyment of this type of record in 2018 was somewhat fleeting but I still admired the very classic revivalist power/heavy choruses and slick, polished Swedish metal sound.

Lechery initially formed around the end of demo-only metal band Dragonthrone and their early line-up featured most of those same members. Most notable of the bunch is the bassist from Arch Enemy‘s ‘Stigmata’ record who fronts the band here on vocals and lead guitars. His style and melodies remind me more of Saxon or Armored Saint rather than power metal of today, and the band’s style is laser focused on traditional 80’s heavy metal.

It is increasingly hard to recommend true metal in 2018 that doesn’t get every single thing perfect, especially with so many bands tapping into the sound so well. The anthemic melodies of songs like “Heavy Metal Invasion”, “Hold Onto the Night” and the album’s title track are almost too similar when the album is left on repeat. So I might recommend sampling the standout tracks from the record rather than spinning it all day long unless you find it inspiring from the get go. If you love nothing more than traditional 80’s metal, particularly of the Swedish and German variety, then there is a lot to love about ‘We Are All Born Evil’. 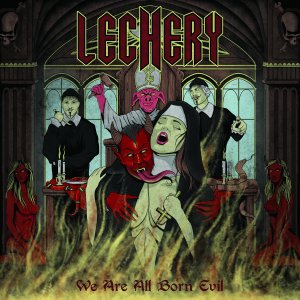