The neocrust movement needs more black metal heroes and German band Ancst have been consistently heavy and voicedly anti-fascist from the start. Their early releases jumped between crust influenced modern black metal with a hint of post-hardcore/metalcore and a couple of ambient releases. Ancst are surely a truly inspired set of musicians based on the sheer amount of music they’ve turned out in the last six years and ‘Ghosts of the Timeless Void’ is their heaviest, most direct suppressive-fire to date. Whereas their 2016 full-length debut ‘Moloch’ was more or less an extreme fusion of blackgaze’s twisted melodic desperation and Skitsystem‘s ‘Gra Värld, Svarta Tankar’ style blasting Euro-crust the result felt a lot like a 00’s melodic metalcore album at the end of the day.

‘Ghosts of the Timeless Void’ takes the double-bass driven atmospheric black metal influences of last year’s ‘Furnace’ EP and find a path of least resistance between it and their previous album. The heart of d-beat is still beating in the band but double bass drumming, beatdown hardcore breakdowns, and some melodic black metal riffing make for a more aggressive and varied recording compared to anything previous. At first this style seemed like a far larger step into extreme metal than bands like Martyrdöd or Young and in the Way had been making but ultimately Ancst are even less willing to settle for the ‘spirit’ of hardcore in their music and they actually play it.

The rattling riffs and double bass storm of ‘Ghosts of the Timeless Void’ remind me heavily of At The Gates second album and the seemingly endless stream of bombastic, down-tuned Swedish death metal bands that south to ape them in the mid-90’s. But they’ve simply captured the spirit of that era, perhaps more than they actually embody modern black metal at all. The additional interest this band generates is clearly the anti-facism that is relatively rare in modern extreme metal. They’ve been heavily political from the start and while I couldn’t understand a word of it without a lyric sheet I still appreciate the content. Blackened crust fans should be pretty excited about this one. 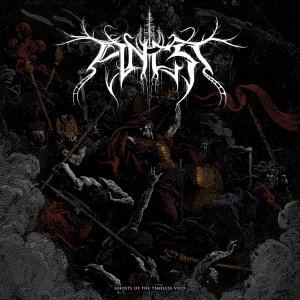