My knowledge of Hungarian metal is extremely limited and that is especially true when it comes to thrash metal. Sure, I know some of the established extreme metal names like Sear Bliss, Thy Catafalque and the fabled Tormentor but as for heavy/speed metal I really only know Moby Dick and Pokolgép. Green Hell is a band I came across through perusing random thrash posts on a Facebook group. Interestingly enough the person posting had hailed them as a Misfits cover band and linked the wrong group. Just FYI that cover band kind of sucks, and well at times so do these guys. ‘Zárkózz Fel!’ is a mid-paced stiff-necked thrash album that pays tribute to 90’s thrash and has fun doing it.

There are hits and a few misses on the album musically, the bass drum hits sound artificial and only the nice pocketed snare sound can save it. I’m generally not in tune with Hungarian rock music or 80’s metal so maybe I’m ear-blind to their influences or melodic nuance. A great example of this is “Világbéke”, a very cheesy track that reminds me of a Böhse Onkelz ballad or something. Anyhow I like this band a lot more when they kick it at higher speeds. Where the album is inspiring is the message; ‘Zárkózz fel!’ offers lyrical motivation to act now, shut it down, and save the world from corruption that would cement the up-and-coming apocalypse as reality.

So, I think if you like half-thrash and oddball rock sung in a language you probably don’t understand this is a striking listen for the sake of perspective. It might take a few spins and you might have to enjoy late 90’s Pro-Pain or even goofy non-funk crossover from the early 90’s. It isn’t going to blow your mind but Green Hell have a true, lifelong passion for heavy music and you can tell they’re having a great time making it. 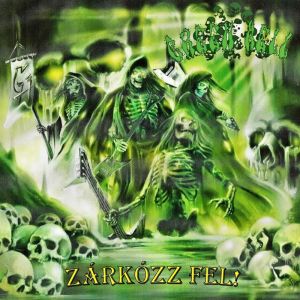