There are few metal sub-genres that I am not a fanatic of but melodic black metal is perhaps one of the more recent love-affairs I’ve enamored myself with. It is heavy and dark with a lot of the grit and intensity of orthodox black metal yet offers melodious emotional corridors through ethereal high speed tremolo picked riffs. I’m not yet a certified black metal aficionado but I’d definitely say the most intense and enthralling moments of Grafvitnir involves a direct expression of haunting melodic black metal. Though their sound isn’t clouded in layers of reverb ‘Keys to the Mysteries Beyond’ has a similarly important occult black metal vibe between Luciferian lyrics and howling expressive vocals. In these strange times where blackgaze and atmospheric black metal have lost all shape and riffs it is refreshing to see an outrageously energetic black metal band putting their all into Swedish black metal art.

The sheer reverberating intensity and hissing vocals remind me of a slightly less melodic Abigor on ‘Verwustung / Invoke The Dark Age’ era before they’d taken a brief trip down Dissection lane in 1995. There is a certain violence to the album that I’d liken to Throne of Ahaz classic ‘Nifelheim’ or Thy Primordial‘s ‘Under Iskall Trollmane’; though Grafvitnir have the layered heft to their sound that goes a few steps beyond what those old school Swedish black metal bands had to offer. A pure, ripping intensity puts them more in the field of modern melodic black influenced metal bands like Dumal, Uada, and Serpent Noir. Few albums from the last few years have such successful flow from riff to riff as those found on ‘Keys to the Mysteries Beyond’.

I won’t say that Grafvitnir are reinventing the wheel or that this album does much to expand upon the sound established on their 2015 album ‘Necrosophia’. You’re still getting that huge echoing sound chamber of blustering melodically reverent black metal, and really only seeing more melody and some enhanced clarity in the mix without losing the chaos of the music. I was initially going to write this one off as slightly generic but after several listens decided it was important to see this release as the band improving their songwriting while retaining their sonic personality. It would be far too reductive and unfair to write ‘Keys to the Mysteries Beyond’ off as generic. The last several years of occult orthodox black metal releases surely have this billowing production sound but very, very few of them have the dark melodic sensibilities of Grafvitnir and they should be championed for it.

Note: At time of review I don’t have a bandcamp or spotify link to share. Will update if one becomes available. 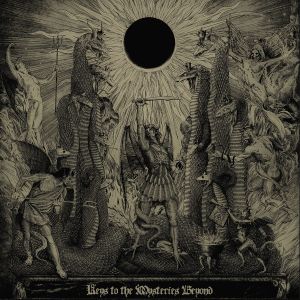