If you’re like me and you’re constantly following the every singly halfway decent Swedish death metal release, wildly salivating at the thought of where death metal could go in the future, you likely took note of Degial around 2012 with the release of their first full-length ‘Death’s Striking Wings’. Their debut was a noisy, powerful exploration of late 80’s death metal centered around the harshest riff-blasts of Necrovore, Pentagram (Chile), and Sepultura‘s ‘Morbid Visions’. The speed and crackling vocals were relentlessly death/thrash in spirit and perfectly evoked the demo-tape era of thrash influenced death metal. While the album was unexpected and outrageously orthodox in it’s heaviness their debut wasn’t much more than samey riff salad after a few listens and their 2015 follow up ‘Savage Mutiny’ was a marked improvement.

Degial’s second album had a sort of opposite growth pattern compared to the first where the more I listened the more it revealed its layers and influences. ‘Savage Mutiny’ is initially a blasting almost war-metal puked death/thrash album with some black metal influences but with repeated listens I found many Slayer-ized moments that recalled the best of Necrophobic‘s classic ‘The Nocturnal Silence’ and their hallowed demo era. In many ways Degial’s mission statement has always been in line with pre-1996 Necrophobic and it shows even more on this third album ‘Predator Reign’. The influences from ‘Altars of Madness’ are far more evident on incredible banging tracks like “Crown of Fire” and “Hellstorm” which invoke Possessed style guitar runs and blazing riff changes that mystify in a way that only old school death metal can.  Because I loved that album and simultaneously yearned for a modernization of their sound, I wasn’t sure if a third full-length would hold up for me.

I was initially at odds with ‘Predator Reign’ and its pure old school approach to death/thrash because, as I mentioned earlier, I see Swedish death metal bands as influencers and innovators for the future of death metal worldwide. I figured this band would follow groups like Morbus Chron, Stench, Venenum, and so many others towards the prog-metal and psychedelia corners of modern death metal. They absolutely did not. So, I hesitated to warm up to the album for a couple of weeks. The energy and howling death growls were more or less too brawny and exciting to ignore beyond a few casual listens and anyone who worships records like ‘Altars of Madness’, ‘Dawn of Possession’, ‘The Nocturnal Silence’ (and even Angelcorpse ‘Hammer of the Gods’) will find an insane amount of riffing blasphemic death metal to soak up. ‘Predator Reign’ is undeniably magnetic in its precise and razor sharp frenzy-inducing storm of death metal chaos.

With bands like Necrot and Spectral Voice out there proving that old school death metal can have greater wide appeal when done right, it might be worth noting that Degial’s third album is similarly engaging and informative when looking back to the ’87-’91 era of guitar riff focused dynamic death metal for inspiration. In sticking to the core of what made death metal an exciting phenomenon in the first place Degial have successfully taken the sound forward without pissing all over the genre’s legacy. 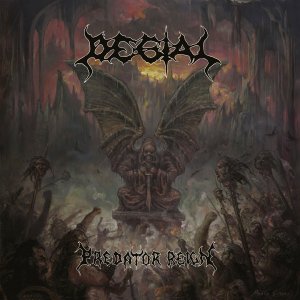