Taake’s ‘…Doedskvad’ was a revelation in 2005 as it combined the majesty and precision of Emperor‘s later era with his own knack for catchy pagan black metal riffs and a pleasingly raw guitar sound. The album galloped and hissed its way into my mind and fortified such favor with Taake that I overlooked a few relatively bland albums afterwards as a result of my fandom. While it seems I will never warm up to his self-titled record from 2008 I do think that ‘Noregs Vaapen’ remains a very solid and polished modern melodic black metal record. This new album ‘Kong Vinter’ ultimately draws out the more accessible elements of his previous record ‘Stridens Hus’ but lacks some of the variety needed in such a similar follow up. There are few things less satisfying than listening to rock influenced heavy metal that ‘feels’ accessible but fails to stick in the mind like pop music is intended, this is the ultimate failing of ‘Kong Vinter’.

The style here should be familiar but slightly more focused than recent efforts from fellow Norwegians Helheim, and this should make sense because one founding member of that band also makes up part of Taake’s live band. But while bands like Kampfar and Helheim have more of a pagan/folk tinge to their sound as they slow move towards progressive black metal style with rock influences Taake resembles something closer to Arckanum‘s ‘Helvítismyrkr’ with it’s semi-melodic expression and harder hitting obscured heavy metal rhythms. While I personally love this type of Scandinavian exploration and experimentation with progressive motif and folk metal bombast Taake’s take is somewhat conservative by comparison and his vocal performances are buried in the middle of the mix.

I was puzzled by this record at first as the more overt rock-ness of it was even more cocky than ‘Striden Hus’. It felt more restrained, or just generally in ‘limbo, without any of the grimness or pretense that had initially generated my interest in Taake. In many ways this echoes the intent of bands like Vreid but chooses a slightly more intriguing method that is maybe more post-hardcore than it is post-black. So, we’re a far cry from ‘…Doedskvad’ in 2017 but since this is largely a refinement of the ideas found on ‘Striden Hus’ I feel inspired by Hoest’s efforts to polish up his ideas moreso than my admiration of his past work. 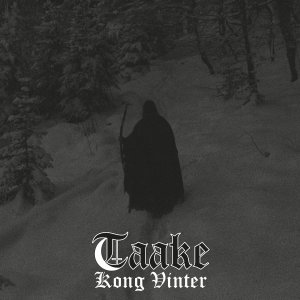