The initial appeal of Aosoth’s early works were admittedly their stripped down approach to Deathspell Omega‘s style of angular, dissonant black metal. But the approach wasn’t so substantial beyond their thickened production and obvious resemblance of another popularized band. For their third full length, ‘III: Violence & Variations’, the band expanded their sound and channeled their own inspiring moments beyond idea cloning and tweaked their production to a certain cleansed state while incorporating a thickly distorted bass guitar presence. It was a notable shift towards distinct personality and the fourth record ‘IV: Arrow in Heart’ was an even more bold step forward, with some atmospherics you might find on an earlier Ulcerate record. Regardless of forward thinking changes these french black metallers still received endless comparison to Deathspell Omega. For this fifth album ‘V: The Inside Scriptures’ it seems they’ve taken ownership of this dissonant style of black metal that really has to be heard to be understood.

The central themes to any dissonant black metal record always seems to pull from Immolation‘s ‘Unholy Cult’ just as much as any orthodox black metal influences and on this fifth record from Aosoth it couldn’t be any more obvious. While they have found personality in piggybacked style and added their own expression they have not mastered this album with clarity as a focus. It is muddy and lacks crisping mid-range tones which force me to focus on grooves rather than nuance and detail. The result is a thickly difficult listen that took at least four or five spins to really absorb. There isn’t enough depth to the full-listen that really requires it to be muddy or obscured and the lack of bass guitar crackle was disappointing after the previous two full-lengths. What initially made Aosoth compelling has now become secondary to the superficial interest the band draws with a beautiful album cover and odd production choices. The album seems intentionally blurred to create interest where inspiration lacks, and in some sense that is devastating to listeners who felt this was a band with great promise.

I have mixed feelings about ‘V: The Inside Scriptures’ because either I’ve not taken enough of a depth charge to determine its worth or it might just have less true impact when compared to the seemingly superior fourth album. Without any truly severe or compelling musical statements to make on their fifth album, it may just be the case of creativity being slightly sapped after the very inspired side-project (feature this line-up more or less) VI and their 2015 album ‘De Praestgiis Angelorum’ which again seemingly channeled nothing but DsO and garnered praise just for that. So, I’m glad that Aosoth have differentiated this project to some degree, which appeals to me as a fan of death metal influence and dissonant black metal orthodoxy but I can only be so happy for the creative process to a certain point. While I won’t say that this is a forgettable album, it hasn’t left its mark on me after a fair number of chances. 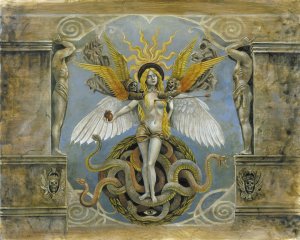