When I typically compile lists of music releases I tend to get a bit lost in the dissonance of comparative anatomy. There are a million reasons to put something at the top of a ‘favorite thrash album’ list and the internal battle that ensues is often: “Is this a favorite because of nostalgia, personal relevance, and style or should it rank higher for it’s quality, sphere of influence, and sales?” Well, if you’re like me album sales and production quality do not matter. I’m not even slightly concerned with how many other people like something due to a better marketing campaign or word of mouth. In terms of thrash metal’s renowned ‘classic’ period (1983-1993) my personal top ten releases are all albums that have held impact and meaning over the course of over twenty years of thrash fanaticism. As such, my choices are often weird to other fans! In terms of popular releases I don’t fawn over groups like Anthrax, Metallica, and Overkill because I feel Slayer, Megadeth and Sepultura have held up so much better.

While I’m not attempting to justify No Return’s ‘Psychological Torment’ as my eighth favorite classic thrash release, it is well cemented into my psyche, I do want to aid other thrash fans in finding what is one of the most interesting transitional thrash metal releases to come from France at a time when many bands had been making the shift to US/UK influenced death metal. As bands like Loudblast, Massacra and Agressor had pioneered their Bay Area influenced death/thrash in France around 1989, heavier spawn (Mercyless, Crusher, Apoplexy, Inhumate) would quickly get to work on the next level of Napalm Death, Death, and Cannibal Corpse influenced death metal. No Return initially existed in that first wave of Slayer, Exodus and Kreator influenced thrash metal and this only really shows on their first album ‘Psychological Torment’ and to some degree on the follow up death metal album ‘Contamination Rises’.

While the album doesn’t really feature any late 80’s death metal tropes it has a very heavy sound that is warmer with production that is comparatively clearer than Loudblast’s ‘Sensorial Treatment’ from the year previous. There is an emphasis on Exodus style shout-alongs and vocals that recall the heyday of disenfranchised thrash vocalists with serious lyrical intentions. What really keeps ‘Psychological Torment’ interesting is both its moshable thrash riffs and exploration of mental illness and general societal ills. No Return paint a bloody picture of a world ruled by fear, religious manipulation, and destructive corporations that was in protest to the frightening corruption leading the free world. I don’t want to go too far down the rabbit hole of when lyricists like this ‘gave up’ but the next two albums would also feature examination of environmentalism, activism and corruption before changing musical style and shifting towards fantasy instead of activism. The ambitious and principled message of this album speaks to their youth and the angst-fueled power that thrash metal was/is capable of.

With hints of Pestilence and ‘Scream Bloody Gore’ nipping at their Slayer-ized versions of admittedly softer demo tracks (see: ‘Vision of Decadence’ demo tape) this was, again, a transitional release for a band finding their voice during the rapid rise of death metal in European consciousness. Were they chasing trends in the 90’s? Probably, I mean I don’t really care because their first two records are excellent examples of the general transition that extreme metal bands made from thrash to death influences in such a short period of time. Even if the band did eventually morph between awkward groove metal and melodic death metal this first album remains one of the best no-frills thrash metal records I’ve had the pleasure of spinning. 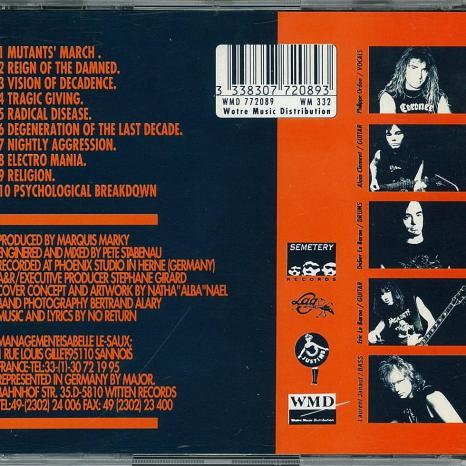