Krallice have more recently taken themselves to task as one of the more interesting bands exploring the ‘technical’ limits of black metal’s voice within complex arrangements. For most fans to be inoculated with Krallice is to admire Mick Barr and Co.’s commitment to both atmospherics and self-sealing style of guitar arrangement. These enveloping and twisting riffs have particularly amped up since the release of the transitional ‘Ygg Huur’ which shed some of their more lauded atmospheric black metal leanings for the sake of what I consider technical death metal riff structures. ‘Prelapsarian’ approached this sound and style in a such a bold way it polarized atmospheric black metal fans en masse, but I personally enjoyed the move away from cinematic filler. Loüm is primarily a continuation of that sound, but it doesn’t always feel like progress despite the heavy collaboration with Neurosis bassist Dave Edwardson.

I’m probably one of the most unabashed Neurosis fans out there, so seeing the guy who sang on ‘Word As Law’ collaborating with a random extreme metal band was a surprise. The implication for a lot of fans was that perhaps Krallice would include atmospheric sludge elements but that wouldn’t amount to much more than wishful thinking. The math-metal growl of the first track “Etemenanki” shows growth for Krallice but starts to resemble the noise-rocking clangor of Pyrrhon once Edwardson’s fatalist shouting kicks in. I’ve always loved his burly Discharge informed howls in the first half of Neurosis’ discography and they work to drive songs that are otherwise chaotically melodic and Cynic-esque in their balance of aggressive technical construction and momentary reprieve. If you can imagine Mithras‘ vocalist singing for Thantifaxath, and that clarity of muscular voicing set above whirling technical black metal that is essentially ‘Loüm’ in a nutshell, though Edwardson is more expressive in delivery.

If you’re expecting a sludge record, stop it. You’ll get Dave’s voice and some light undercurrents of angular, dissonant hardcore and noise rock influences but very little of the atmosphere you’d expect. This is a bit of progress towards Krallice’s interest in chaotic technical extreme metal that is often hesitant to place melody before complex composition. While I would have liked more melodic refrain, Krallice are future proofing themselves with this style. By including Edwardson’s voice and songwriting during their complete shift away from atmospheric black metal Krallice have realized an oddly warming dystopic vision of extreme metal where a booming voice can drive a spiraling hiss of post-modernist guitar rants. The songs co-written by Edwardson highlight his tendency to use bass voicing to double his vocal rhythms and this is perhaps why the collaboration works so well. Seeing Krallice adapt and accentuate Dave’s musical personality shows a brilliant set of musicians finding bursts of genius that allow both artists to enhance one another. It is exciting to think that they might collaborate again someday with greater familiarity. ‘Loüm’ is dark, complex, and challenging in it’s density so I would suggest giving it time to warm and spin within the gears of your mind. I found it daunting yet continually alluring. 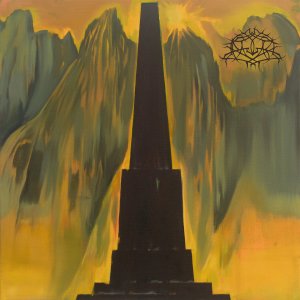