SteamWorld Dig was the first PS4 game I bought more or less by proxy as I’d purchased it when I bought a PS Vita TV and that purchase was ‘cross-buy’. I didn’t really pick up and play the game until I’d had a PS4 for around six months and I wasn’t all that impressed. The art style felt a lot like a cheap flash game despite relatively smooth animation and high quality resolution and the first few hours of the game don’t offer much convenience in the way of digging upgrades. The ‘feedback loop’ of this game isn’t all that different from Diablo despite playing more like a cross between Mr. Driller and a Metroid game. I don’t mean to say that this game has loot or RPG mechanics, rather that it relies on limited resources (health, light, and later water) that force repeated trips back to a hub to trade in gathered ore for money that buys resource management upgrades and new abilities. So, nothing like Diablo, really.

The game itself is very simple and its scope is small enough to recall the later SNES/Genesis age of video games where games became larger and lost their arcade roots. You’re a robot that wanders into a mining town full of characters that convince you to dig to the bottom of their mine to find a guy named Joe. I dunno how correct that is because I played the first 3-4 hours of this game about three years ago and only recently picked it back up to finish it so I could see if the sequel SteamWorld Dig 2 is worthy of purchase. What didn’t grab me before was a welcome casual experience now. Sure, the story is completely boring and the game isn’t difficult but the experience lured me in enough to finish the game.

The platforming is precise and downward exploration is puzzle-like as you descend the rocky layers towards the “Old Town” and eventually into a machine core. There are three main layers to dig through and each essentially makes up a third of the game. You’re not simply worming your way downward, though, because the changes you make to the terrain are almost entirely permanent. If a rock falls on expensive ore, it is gone. The gravity mechanics often lead to deaths and cave-ins that are entirely avoidable if you dig strategically with ore acquisition and side-areas in mind. If you’re considering playing this let me reassure you that you can skip some of the harder to reach ore early in the game because you will get abilities later in the game that allow to you mine any and all ore you might have missed. The game offers up a surprisingly diverse set of enemies in each area of the game that offer minor combat challenges but the game only features one boss at the very end of the game.

While the latter two thirds of the game were the most interesting I didn’t find that the final third, which takes place in magnet and spike filled electro-caverns with respawning dirt patches, to be as much of a ‘revelation’ as some folks did when this came out. It wasn’t too hard to consider that this game was a post-apocalyptic scenario despite it’s cute and cartoonish looks . Of course ‘Old Town’ was covered in a millennia of dirt and rocks, and that was covered up by an earlier high-tech generation. None of this was thrilling or deep compared to the exploration and abilities given to the main character.

Working towards upgrades as your abilities increased offers a sort of pleasing style of gameplay and hunting down ore was a lot of fun especially as the enemies presented more complex consideration. If they didn’t make you run back and forth to the town hub without a faster travel option so often, this would be an incredibly fun game. I would highly recommend it if you’re looking for a cheap and easy game that has at least 10-15 hours of replay value. While it is tedious at first this first game in the series was worth finishing. Not sure I will pick up SteamWorld Dig 2 or SteamWorld Heist anytime soon, but I had fun. 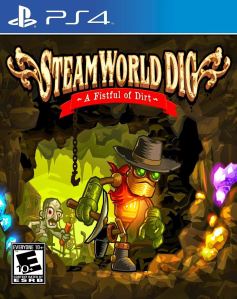