After three soul-searching albums Inanimate Existence have found their most palatable and least derivative identity to date. Evolving from a Deeds of Flesh inspired technical death metal band concerned mostly with flash-and-bang technicality into a Cynic-enriched product better suited for the Willowtip bargain bin these talented fools hit a musical brown note for me with 2016’s ‘Calling From A Dream’. The progressive intentions went from bad (Augury, sorry!) to worse (Fallujah, lol!) and the awkward female vocals only seemed integrated for the sake of “Can we call this progressive? No? Add female vocals? Check!”

With the band now on The Artisan Era, a small label that also recently signed Augury, so renewed is their sonic identity. The djent-ed tonality of some major riffs is still there, familiar guttural vocals are now omnipresent, and the talented bassist practices restraint enough to give way to what I’d consider tech-death’s most listenable implementation of keyboards/synth to date. Don’t get too excited, though, this isn’t exactly the spiritual successor to Fleshgod Apocalypse‘s ultra-symphonic ‘The King’. The focus is highly technical but it would be most fair to call this a progressive death metal album.

By sheer virtue of their existence, most technical death metal fans put guitar performance above all else. While this is absolutely Inanimate Existence’s strongest recording it’s strength is in composition and restraint; which is probably incredible bizarre from the perspective of casual extreme metal listeners. The songs are dense, dynamically paced, expressive and offer up some wild shred highlights. ‘Underneath a Melting Sky’ never loses its central theme through variation, rather they build upon it with increasing melodic flair as the album plays. By the time the combo of ‘The Old Man in the Meadow’ and ‘The Djinn’ hit I’d realized the record felt like an elevation of tech-death experiments like Sickening Horror‘s ‘Overflow’ which explored the musicality of tech-death above sheer arrogant execution.

Inanimate Existence is still very much a one-note death metal band at their core, the quiet refrains and chugging riffs still reveal themselves through repetition. The methodology is keen yet the limitations of sub-genre demand that the album retains an equally flattening tonality throughout. For non-fans of death metal it will be yet another fiddly wall of sound, but with silly keyboards fluttering about. For my tastes this is a highlight in technical death metal for the year and a showcase for a talented band slowly expanding their limits beyond showmanship and needless technical flair. 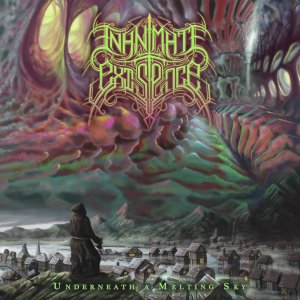