After several years of obsessing over classic thrash metal, reading every review and tracking down every album listed on ClassicThrash.com I had developed an interest in a few key bands: Agent Steel and Dark Angel. ‘Unstoppable Force’ and ‘We Have Arrived’ were obsessions of mine and I tried to track down anything even slightly related to either band. The drummer from the first Dark Angel record played drums on the 1986 demo by Holy Terror, and the guitarist from ‘Skeptic’s Apocalypse’ played guitar on every Holy Terror release. Well, I was in luck because an out of print compilation of both Holy Terror albums was available though digital piracy. For those who sneer at such procurement, keep in mind that both albums were not available outside of eBay for hilariously high prices. I feel sorry for folks who grew up rich enough to afford everything they ever wanted, because being poor slowed me down and forced me to dig into whatever I could get my hands on. Never having the luxury of passing on things that could be great. So, ‘Mind Wars’ was exactly what I’d been looking for at the time.  It had anti-religious lyrics and themes, it was fast paced thrash metal, it was melodic and memorable and the vague relationship to other bands I loved helped me idolize it as much as humanly possible. There is a capsular, solitary joy that comes from discovering something amazing that few people know exists. In this sense back in 2002 I was a retro-thrash metal hipster in, one who felt he had discovered amazing golden nuggets of metal hidden past. I was able to laugh at revivalist thrash bands back in the day because let’s face it, thrash metal had the best guitarists back in it’s heyday.

‘Mind Wars’ sits next to Sabbat‘s ‘Dreamweaver’ and Sepultura’s ‘Beneath the Remains’ for all time favorite thrash metal records as it has comparative intensity with similarly rough production. The style of thrash here is probably more purely rooted in Bay Area thrash, though, as it takes NWOBHM melody and hardcore punk intensity literally beyond what most speed metal bands were willing to do post-‘Reign in Blood’. You’ve got a melodic but not accessible anomaly not unlike Vio-lence but far more palatable. I could choke on my tongue trying to describe Holy Terror’s place in thrash metal all day, but honestly just listening to their stuff should clarify.

I prefer ‘Mind Wars’ over ‘Terror and Submission’ purely for the additional melodic confidence and clearer production. It is sort of like comparing the first two Demolition Hammer records: You’re still getting great shit either way, just the second record is a step up in general quality. You could start with either album as an introduction. After several re-issues, some reported reunions in 2005, the vocalist passed away in 2012 around the time a true revival appeared to be happening. As a fan I was almost too excited for a reunion but I figured I’d have to settle for remasters. Dark Descent released a demo/live compilation a few years back and that was neat and all but the Candlelight Records re-issue of both full-lengths is the essential stuff. I won’t post links to Candlelight’s shop because I hate mail-order from them, they always mess up my orders. You can find either album, and the re-issues on YouTube streaming at various quality levels. 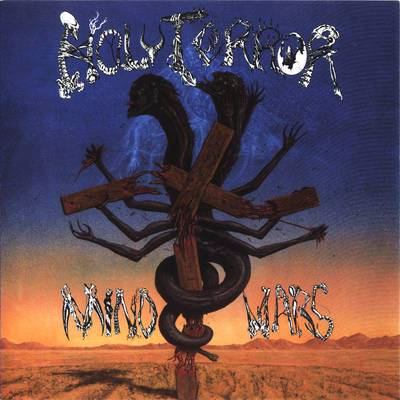