You know how fine dining focused television shows offer glimpses into the minutiae of flavor infusion elements? No? Yeah, me neither I definitely don’t watch reality TV shows at all… To say Moral Void’s debut full-length ‘Deprive’ is black metal scented, sludge metal smoked, and classic crust punk at it’s core might suggest too fine a palate for such things but it isn’t too far off. The core of their sound so far has been something akin to Swedish crust/d-beat but on their split with Young And In The Way they’d incorporated a harsher sound that ventured into metal territory briefly from song to song. Think something along the lines of a less polished Mammoth Grinder or Black Breath with most of the death metal reamed out. The whole black/crust thing has nearly been done to death and it seems the natural evolution of that style either ends up being Kvelertak or Darkthrone. The same thing has been happening with death/crust mixtures since the late 80’s and Moral Void’s latest album doesn’t reinvent anything you’ve heard previous.

‘Deprive’ is a simple blackened, far less melodic take on what Martyrdöd did with ‘Elddop’ a few years back: Polished up sound, relentless energy, and some light experimentation with style. Compared to other average black/crust bands like Hopelorn this is far more appealing the instant it kicks off and the variations on a theme here should excite hardcore/crust fans. All of the impressive/predictable kick-ass grinding and screaming does occasionally come to a halt on tracks like “Drudge” and “Shadow” which remind me of when Benümb would slow down on ‘Soul of the Martyr’, and I’d like to hear more of this side of the band on future releases. Besides, since Bädr Vogu has turned into “black metal High on Fire” we need a new blackened crust/sludge band! Every year I need two things: At least one death metal record that sounds like Entombed/Dismember Sunlight Studios early 90’s era, and at least one inspiring extreme metal/crust hybrid band. I’d say ‘Deprive’ is the best choice so far this year for the latter. I’m a fan. 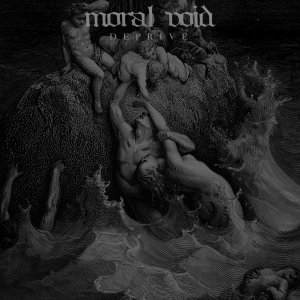