While Incantation lost their relevance back in the early 00’s, the band experienced a sort of renaissance with the release of ‘Vanquish in Vengeance’ in 2012 and ‘Dirges of Elysium’ in 2014. Both albums are lengthy, twisted chunks of the doom/death metal that initially put the New Jersey band on the map in the early 90’s. ‘Profane Nexus’ carries on where ‘Dirges…’ left off but ends up hitting a creative dead-end in terms of variety. The record starts of with two texturally thrilling tracks of old school death metal with some doom metal tinged riffing. I was ready to start writing paragraphs about the textural feeling grating across my ears like an autistic child discovering Velcro for the first time… but then “Visceral Hexahedron” took me right back to 2006 when the band were at their laziest riff-wise and the rest of the album follows suit. “Incorporeal Despair” is a legitimately bad song, and probably my least favorite track the band has written to date. The vocals are terrible, like a half-hearted bleating sheep, on the doomy track in particular. The dense production doesn’t create the atmospheric death/doom sound they had been evolving on the last two records and instead comes across as regressive for no good reason.

It wouldn’t be fair to say that ‘Profane Nexus’ is a full-blown letdown but it does pale in comparison to their more recent output. With their 25th anniversary happening more recently and some reissues of mixes and live recordings I had the sense that this band had been revived and made current again. This album makes an honest attempt at their most doom-paced songwriting, but the strength of that doom/death style is let down by clunky production and a new second guitarist whose resume includes briefly being in Fleshtized, although he seems to have contributed very little to this full-length. The loss of Alex Bouks, now in Immolation and Ruinous, hurt this record quite a bit and we’re left with McEntee’s classic yet simple style dominating the record. I don’t think long time fans will be disappointed with ‘Profane Nexus’ but nit picky folks like me won’t see this as one of the better Incantation records. It’s not such a shame that younger bands like Father Befouled and Dead Congregation are surpassing these old gods in style and substance after years of being second-best. But hey, I don’t want to sound too negative here. The album art is great and the music still holds up pretty well, the slower pace is occasionally devastating… if not somewhat sparse. 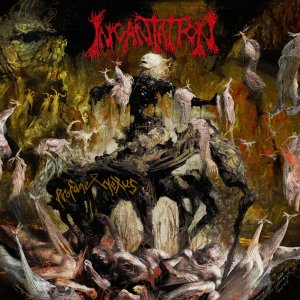