What better way to ingratiate yourself with a new band than to use nepotism and name-dropping to set the stage. I mean, post-hardcore fans might remember reading those old Revelation Records catalogs? They were giant tomes and all of the main Revelation line-up in the 00’s were “ex-member of…” bands featuring collaborations between fellowes. You could envision what a band might sound like because a lot of artists were responsible for creating unique sounds, and they’d stick to their guns to maintain that personality. Swedish death metal isn’t the same, though. A lot of Swedish death metal personalities blend together due to copycat guitar tone, riff style, and a real lack of distinctive vocalists. So, should you ignore most “super group” records? Well, no way! I mean you could always be surprised, right? I mean, don’t get me wrong here, I wasn’t surprised at all hearing The Lurking Fear for the first time. Big deal, I’m just a giant floating brain that feeds on death metal. Why should you be excited to hear it?

The five guys that make up the band have a pretty great track record, some of them playing on some pretty huge worldwide successes in extreme metal. Tomas Lindberg is probably the most recognizable figure in Swedish death metal as the front-man for the thankfully and tastefully resurrected At the Gates, but he’s also had some neato stints in bands like Lock-Up, Skitsystem, and the generally embarrassing Nightrage. His voice belongs in At the Gates, and yeah I realize how stupid that sounds, but this record is probably the best thing he’s done since, well ‘At War With Reality’. The shrieking edge of his vocals is tamed and the deeper register sounds nice, thought his vocal patterns are uninventive. Adrian Erlandsson is no longer in Cradle of Filth, Paradise Lost, nor the latest Vallenfyre so it seems he’s committed to The Haunted, At the Gates and this band. I find that he has always sounded like a session musician and the patterns here aren’t written to be complex or theatrical. Fredrik Wallenberg founded crust/death band Skitsystem with Erlandsson and Lindberg back in 1994, presumably after one of my favorite melodic black/death bands Sarcasm went on hiatus after their first album was stuck in limbo (and not released until recent years). So far, you might assume this band is going to sound like Skitsystem but honestly that is only about 30% of their sound. How so? Because you can’t discount the songwriting of Jonas Stålhammar whose distinct style gave way to God Macabre, the Bombs of Hades and a stint as second guitarist in alterna-psych rock collective Crippled Black Phoenix. Bassist “Dread” played guitar and sang on just about every Edge of Sanity album as well as lesser-known Infestdead. These days he fronts the uninteresting retro death band Tormented. See, already two paragraphs just on these idiots resumes and I have barely talked about the actual music. There’s a lot of history behind this record and it is easy to build up weirdly high expectations for a record that should just be seen as a reasonably good genre entry.

I didn’t get the sense that The Lurking Fear is anything more than a quick side project as I gave it a few serious listens, though it is highly professional. The buzzing, distinctly Swedish guitar tone just sounds like a ‘settled upon’ average of all of the bands these guys have been involved in since the early 90’s. The tone and production of the album takes no risks, and ends up sounding like a way more clear version of Entombed’s ‘Inferno’. The songwriting must have been collaborative but I’m almost certain the key pushers on ‘Out of the Voiceless Grave’ are the two guitarists Stålhammar and Wallenberg, who have taken the core of their bands Bombs of Hades and Skitsystem and melted out the crust/death collaboration with some melodeath and death ‘n roll cliches. The album takes so few chances despite all of them being righteously into bands that are at the cusp of modern Swedish death metal and just ends up being simply “good” for my taste. To see Lindberg fawning over groups like Morbus Chron and Tribulation then forming The Lurking Fear only to have it sound like “ATG meets Bombs of Hades” is -not- disappointing at all, because I’d gotten ahead of myself with unfounded expectations. As a result I can fully spin this record over and over and enjoy it. There are no big huge riffs, though there are some great subtle ones, and there are no huge guitar solos or conceptual atmospheric experiments. From the Lovecraft themes to the crusty melodeath riffs, The Lurking Fear is a simple and refined average of the five members musical leanings. It works, but I don’t think anyone will be blown away by it outside of some nostalgia and my favorite track “Beneath Menacing Sands”. I will continue hoping the follow up to this record capitalizes on the menacing, doom-like crawl of that track. 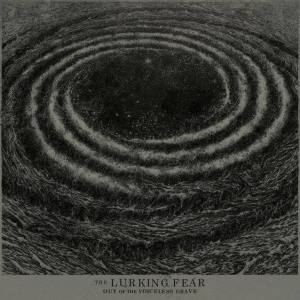