“A door to profound darkness.“

Finnish death metal has been a healthy side-obsession of mine since discovering Sentenced’s ‘North From Here’ and ‘Shadows of the Past’ around 1996 or so and much of my favorite extreme metal year after year hails from Finland. Bands like Coffincraft, Vorum, Hooded Menace and particularly Krypts have highlighted my death metal listening over the last several years but to jump into ‘The Mortal Horizon’ expecting something similar or comparable isn’t the best angle of descent. Desecresy exists in the deepest, darkest caverns of old school Finnish death metal and I found their discography easier to appreciate after a short list of required listening. The claustrophobic world of late 80’s/early 90’s Finnish death/doom demos is the seed for Desecresy’s style: Abhorrence ‘s self-titled 7″ from 1990, which offers a more primordial alternative to the related Amorphis demo ‘Disment of Soul’ from 1991 a recording that sounds the most exactly like what Desecresy has been doing over the course of five full-lengths. I would also point towards Rippikoulu’s cult classic demo ‘Musta Seremonia’ as well for it’s similar play with pacing, chunky riffing, and brutal vocalist. Once you’ve absorbed the filthy coffin stench of those oldies, you have a point of reference for what inspires Desecresy, but not the complete picture.

‘The Mortal Horizon’ is a collapsed lung-coughed chunk of ground up dark meat death metal. The thick and sludgy guitar tone and cacophony of its layers have me rethinking previous assessments, where I’ve simply likened Desecresy to his previous band Slugathor. I mean ‘Echoes from Beneath’ was essentially the first Desecresy record to my ears, though it was more urgent in pace and focused less on atmospherics. Now I hear more than just Finnish death metal’s greatest past, with comparisons now pointing towards elements of Bolt Thrower‘s ‘The VIth Crusade’ and Cianide‘s ‘The Dying Truth’. While he is typically responsible for the entire project this recording is the first, as far as I know, to feature Grönqvist on vocals as well with no credit to Jarno Nurni on vocals. At first I really couldn’t tell but there are moments where the vocal performance is a little off, although I will say I fully enjoyed the increased variation in style. Even if the short tangents into gurgle vocals are kind of strange to start, they work well enough when he decides to do them.

I’ve already been a fan of this guy’s style and approach since Slugathor’s releases, but I could see a newcomer picking up ‘The Mortal Horizon’ and not understanding the obscured production sound. My first impression was “Oh damn, demo budget this time.” but after two or three spins I just cranked the volume and got lost in it. Despite the cheap sounding production it still works, I mean his grungy riffing and drowned out sound are the perfect vector for that lurch-forward feeling that pushes me into a pit of depressive thought and meandering futility. I find this record completely hypnotizing in the same way Cauldron Black Ram is, as they get away with simple production and straightforward riffs in the same way despite a very different sound. It’s a shame the content feels mostly redundant to the ideas on ‘Stoic Death’ from 2015 and in some cases, less memorable. It is hypnotic, depressing, and ultimately a solid release from an artist with a unique, perfectly underground vision. 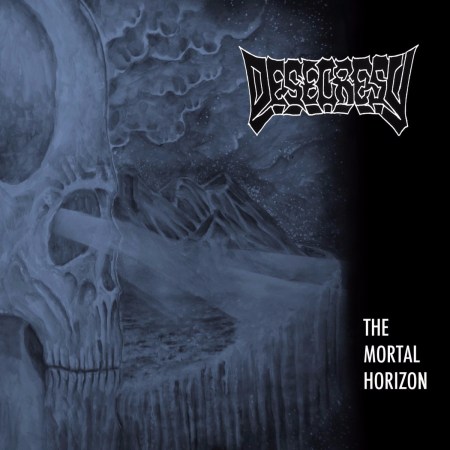