“I’ll rip the nails from your veins.”

Thrash metal material worth listening to experienced a life-threatening drought in 2016. Although enfeebled by crippling nothingness that previous year absolutely had some real amazing moments in newfangled thrash metal: Deströyer 666 was an instant metal-as-balls classic, Vektor experimented so hard they decided to disband… but while there were some decent bangers (Ripper, Desaster) it wasn’t a great year to be a die-hard fan of thrash. Too many inauthentic and under-served retro thrash albums come and go year by year and none of them gave me more than a half-chub beyond the usual outing and I have very little respect left for the oldest bands in thrash metal’s history making a joke of themselves.

I’m not a snob, really, I spent countless hours of my life studying the history of thrash metal and listening to absolutely everything thrash metal and related. All of the speed  metal I could chug, all of the death/thrash I could immerse my nuts in, every damn thing. When it comes to modern day thrash I’ve found I have to get the right feeling from the music. ‘Nightmare Logic’ takes me back to the primordial glitch in my brain that erupted with the revelation of ‘Ride the Lightning’ (alternately: Sepultura’s ‘Arise”) and D.R.I.’s ‘Crossover’ in the most perfect way since maybe Dekapitator’s ‘The Storm Before the Calm’. This sophomore album delivers even more of an angry, serious-assed thrash metal album than their debut. The sound, the furious howling of the damn thing is balls-out and near perfect for my taste. That isn’t to say it is drastically better than their debut, but it does capture a certain urgency and rawness that you only found before thrash metal mutated towards Groove metal and masturbatory posturing in the early 90’s. I love this stuff and it helps a great deal that the tracks have chorus, breaks, bridges, solos etc. as they visit the core structures that made thrash interesting in the first place: Mixing hardcore punk urgency with the extremity of speed metal. There are huge riffs, and memorable choruses, all over ‘Nightmare Logic’ even in just the first couple tracks. Its a great thing to behold when a modern day band does this style of music right without being so literal, or cloning.

A lot of folks threw around the Cro-Mags reference when talking about the first Power Trip album but I didn’t hear it at all, maybe the vocalist’s gruff delivery? Parts of Alpha Omega certainly have pure thrash that is vaguely similar, but there’s no ‘Age of Quarrel’ hardcore punk anywhere on Power Trip’s full lengths. I’d say the crossover takes a backseat even more on ‘Nightmare Logic’ and this is nearly a very heavy pure thrash album. At first I felt it deserved a comparison to a band like Epidemic, especially the first and second releases from that group (who are underrated), but the more I listen I’m reminded of No Return‘s first album “Psychological Torment” because it had that death/thrash intensity but still kept the Vio-lence style Bay-area riff machine going. I haven’t really loved a thrash album like this in a few years and highly recommend it to folks who live for the 1986-19890 years of thrash as it converged with crossover, death and whatnot. 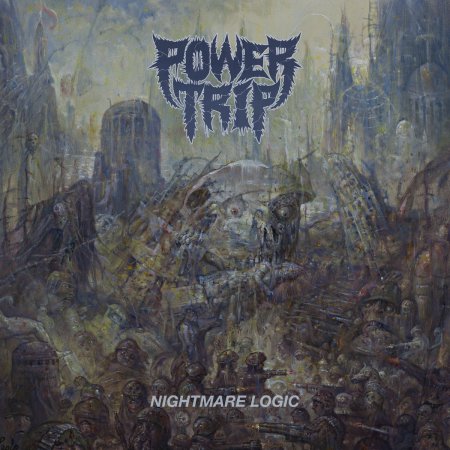